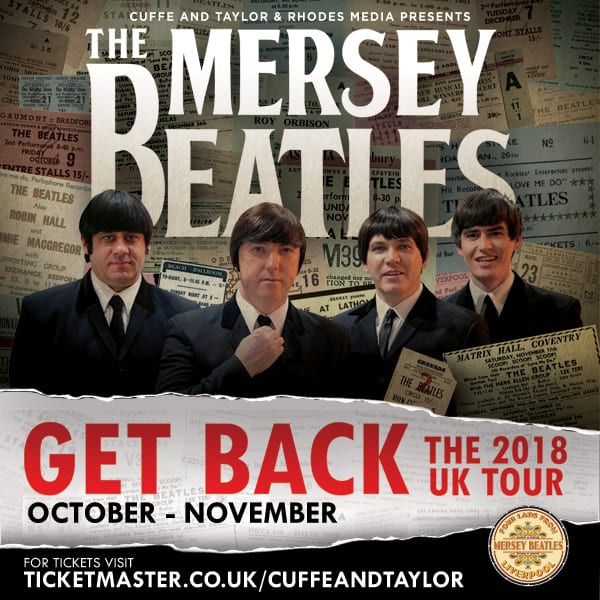 After sold out shows in the USA, Australia and Europe, the world’s favourite Liverpool-born Beatles tribute band – THE MERSEY BEATLES – are embarking on an historic UK Tour.

Their GET BACK 2018 TOUR visits the very same towns, cities and historic British venues that the original Fab Four first rocked in the 1960s. Tickets go on sale on Friday December 15th via www.ticketmaster.co.uk

Fewer than 80 of the 200-plus British venues The Beatles played between 1957 and 1966 remain today as so many historic dance halls and theatres that shook to the original Merseybeat sound have been demolished.

In a unique bid to celebrate both The Beatles’ music and the special places that helped shape that world-changing Rock ‘n’ Roll sound, The Mersey Beatles will play 12 original Fab Four venues in October and November 2018.

Within a stunning two-hour show – which brilliantly captures all the hits from Love Me Do to Let It Be – The Mersey Beatles will play the exact same songs John, Paul, George and Ringo did at the venue, allowing audiences to really ‘Get Back in time for a true Fab Four experience’.

Ranging from town halls and ballrooms to old cinemas and theatres, the tour opens on October 31st at Port Sunlight’s historic Hulme Hall where, in 1962, Ringo Starr made his first appearance as The Beatles new drummer.

Other venues include Newcastle’s Majestic Ballroom (now the O2 Academy). It was here, after a 1963 show, that John Lennon and Paul McCartney penned the worldwide smash She Loves You in a hotel around the corner.

The 17-date Get Back Tour visits England, Wales and Scotland, including a show at Alloa Town Hall which, in 1960, the then ‘Silver Beetles’ played as part of their first ever professional tour – just months before they famously headed to Hamburg for the first time.

When it comes to stage performance, The Mersey Beatles brilliantly exude the inner and outer spirit of the original Fab Four from the costumes, the haircuts, the instruments and, of course, that unmistakable and legendary Liverpool-born sound.

Joe Flannery, Beatles’ manager Brian Epstein’s assistant, added: “When I saw them play in The Cavern, they perfectly recreated the atmosphere that the original Beatles produced. It was just like listening to The Beatles again.”

Formed in 1999 in Liverpool by four school friends, The Mersey Beatles have toured the world many times over. And the band – Mark Bloor (John), Steven Howard (Paul), Craig McGown (George) and Brian Ambrose (Ringo) cannot wait to hit the road in 2018.

Steven said: “This tour is going to be amazing! We are, of course, all Beatles fans and, as Liverpool lads we’ve been obsessed with the band since we were in school. It’s going to be great to follow in the Fab Four’s footsteps and truly recreate those special shows at these wonderful and historic venues.”

Mark added: “We pride ourselves on bringing a true Beatles experience, covering all the eras from the days of The Cavern Club, through Beatlemania to Sgt Pepper and the band’s final gig on the rooftop of the Apple offices. We cannot wait to Get Back to where it all began for the greatest band of all time.”

Tickets go on sale at 9am on Friday December 15th via www.ticketmaster.co.uk 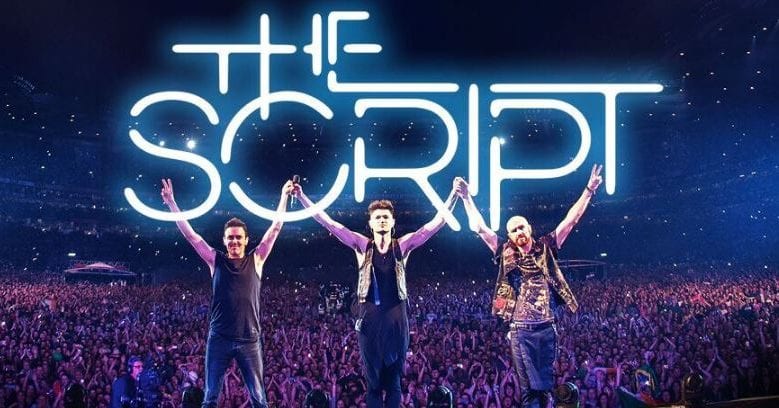 The Script are heading to the Yorkshire coast next summer for what promises to be a sensational night at Scarborough Open Air Theatre.

Tickets for go on sale at 9am Friday December 15th via www.ticketmaster.co.uk

Since arriving on the scene in 2008, The Script have sold more than 29 million records and given us such global hits as We Cry, The Man Who Can’t Be Moved, For The First Time, Hall Of Fame (featuring will.i.am) and Superheroes.

Their 2017 album Freedom Child topped the UK Official Albums Chart and lead single Rain picked up phenomenal radio airplay. To date, the video for Rain has been viewed more than 26 million times.

The Script – lead singer Danny O’Donoghue, guitarist Mark Sheehan and drummer Glen Power – are also one of the biggest live acts and have sold more than 1.4 million tickets for shows around the world.

Ahead of their live date at Scarborough OAT, Danny said: “The response to the new album has been fantastic and we cannot wait to take it out on the road in 2018.

“We’ve never played Scarborough Open Air Theatre before so we are really looking forward to heading to the Yorkshire coast. We hope you can join us to rock in this beautiful setting and what promises to be a fantastic atmosphere on the night.”

On the global success of Freedom Child, which was number one on the iTunes chart in 13 countries, the band said: “You guys may never understand how happy we are to have achieved our fourth Number 1 album. You see, we’ve worked so hard on it and ultimately the fans decided whether it’s a strong album or not. We’re so, so lucky and are humbled by it.”

Freedom Child saw the band presenting a collection of urgent, timely, future-facing anthems that speak of both real-life events and real-time sonic adventurism. The album was recorded between London and Los Angeles and, for the first time, the band chose to work with some outside writers and producers including Toby Gad and Nasri Atweh.

The Script’s concert at Scarborough OAT is presented by promoters Cuffe and Taylor. Director Peter Taylor said: “We cannot think of a better Christmas present for Yorkshire fans of The Script than to announce this sensational band are heading to Scarborough OAT in 2018!

“The Script have sold out arenas around the world and are quite rightly regarded as one of the UK’s best live bands. This gig is going to be something really special.”

Tickets for The Script’s show at Scarborough OAT go on sale at 9am Friday December 15th. They are available from www.ticketmaster.co.uk (0844 844 0444) and www.scarboroughopenairtheatre.com or in person from Scarborough Open Air Theatre Box Office (01723 818111) and the Discover Yorkshire Coast Tourism Bureau (01723 383636).