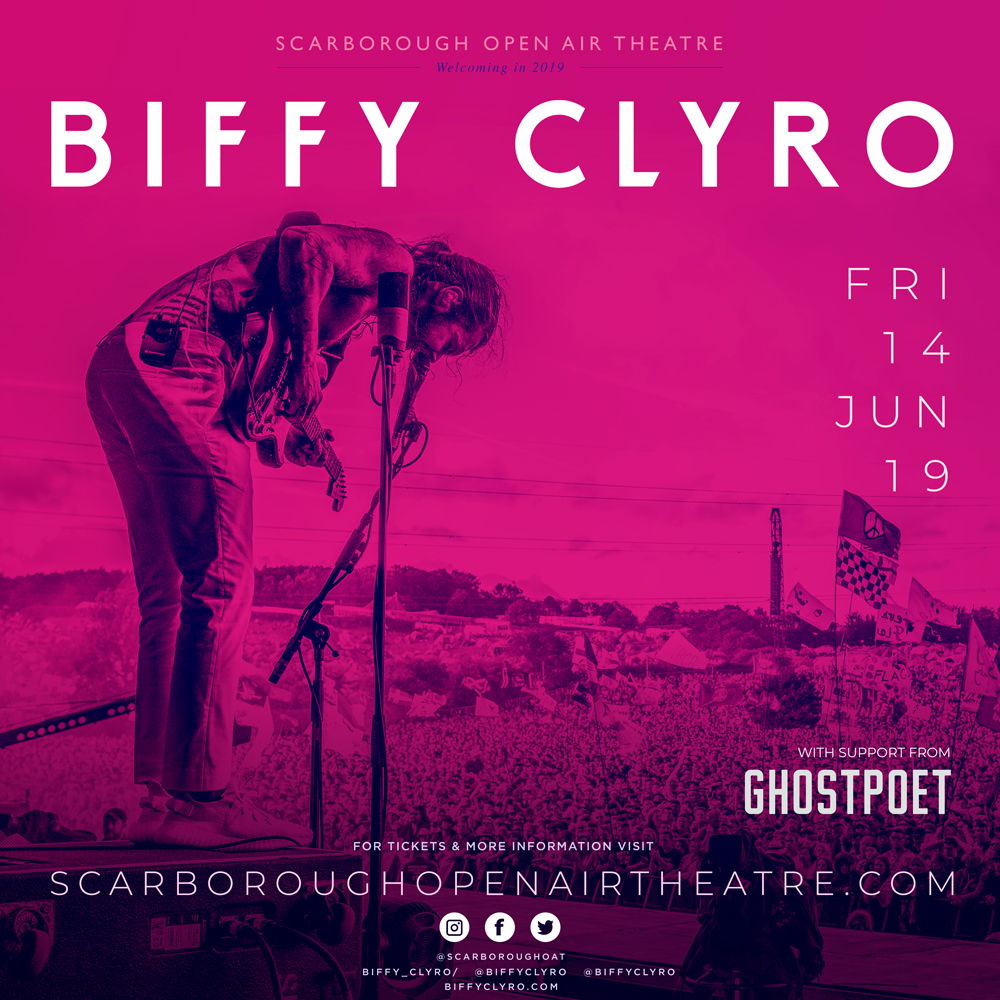 Biffy Clyro will bring their electrifying and explosive live show to the Yorkshire coast next month – the band’s only UK mainland live date this summer.

The superstar rock trio headline Scarborough Open Air Theatre on Friday June 14 for what is an exclusive warm-up show before the band embarks on a series of headline appearances at festivals across Europe including the Isle of Wight, Deichbrand, Lollapalooza and Indiependence.

Tickets go on sale at 10am on Friday May 24 via www.scarboroughopenairtheatre.com

Biffy Clyro are no strangers to huge stages – headlining Reading and Leeds festivals last summer – and have played to massive sold-out crowds all over the world in the last decade.

Their Scarborough OAT date is presented by Cuffe and Taylor. Director Peter Taylor said: “Biffy Clyro are one of the biggest rock bands in the world and we are delighted to be bringing them to Scarborough OAT for their only UK mainland live date this summer.

“Over the last decade they’ve headlined some of the biggest music festivals. Fans have been asking us for some time to bring them to Scarborough and so we are delighted to today announce they’ll be here on Friday June 14.

“This is quite simply going to be one of the best gigs ever to be staged at Scarborough OAT and we would advise fans to get their tickets now.”

Biffy delighted fans last week with the release of their self-penned soundtrack for the Jamie Adams-directed movie Balance, Not Symmetry, which debuts at Edinburgh International Film Festival on June 23.

This stunning 17-song album explodes into life with the title track, which tightly packages Biffy’s angular rhythms with the kind of sky-bound hook they’ve established as a hallmark of their sound.

The story of Biffy Clyro – Simon Neil (guitar/vocals), James Johnston (bass) and Ben Johnston (drums) – is as romantic as it is archetypal. Three childhood friends from Ayrshire formed a band, delivered three albums of abrasive youthful exuberance and finally cracked the big time when their fourth – 2007’s Puzzle – smashed into the UK Top 10.

By the time the promotion of their fifth album – 2009’s Only Revolutions which included the brilliant Bubbles, Mountains and Many of Horror – had ceased, they were bona fide stars who could deliver hit singles in an era in which rock bands rarely trouble the charts.

Platinum-selling Only Revolutions was followed by Opposites in 2013 and 2016’s Gold-selling  Ellipsis which both topped the UK album charts.

To date Biffy Clyro have won no fewer than four NME Awards, four Kerrang Awards as well as being nominated for Best British Group at The BRITS twice.

Balance, Not Symmetry is available to download and stream now and will be released on vinyl on July 26, the same day as the movie is released in the UK.