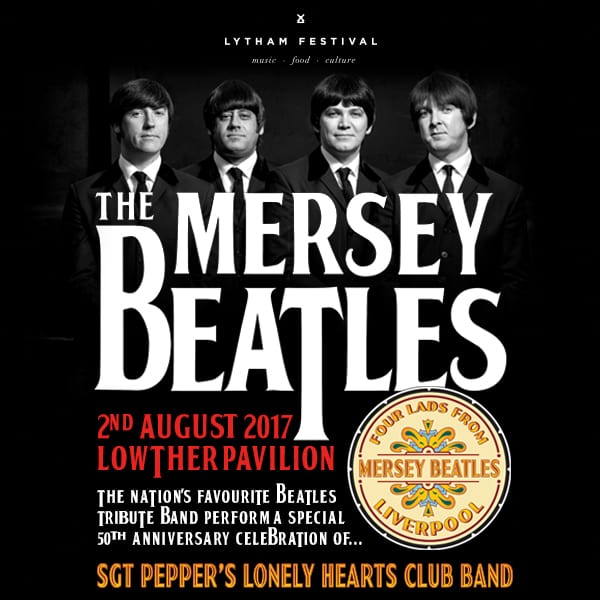 Lytham Festival will celebrate the music of The Beatles this summer with a special tribute to the Fab Four.

Tickets go on sale Friday May 19th at 9am from lythamfestival.com and lowtherpavilion.co.uk

This stunning two-part show will see the band – who are currently on a major tour of America – perform the Sgt Pepper album in its entirety. A sensational second half will take the audience on a journey through the Fab Four’s legendary hit-packed back catalogue – from the songs of Beatlemania to Abbey Road.

The Mersey Beatles were the resident Beatles tribute band at Liverpool’s legendary Cavern Club for 10 years, between 2002-2012. They have played more than 600 shows at the world-famous venue – twice as many as The Beatles themselves!

And when it comes to stage performance, The Mersey Beatles brilliantly exude the inner and outer spirit of the original Fab Four, from the costumes, the haircuts, the instruments and, of course, the unmistakable live sound.

When asked about The Mersey Beatles performances Joe Flannery, Beatles’ manager Brian Epstein’s assistant, said: “When I saw them play in The Cavern, they perfectly recreated the atmosphere that the original Beatles produced. It was like listening to The Beatles again.”

Since leaving The Cavern to tour the world, The Mersey Beatles – who are Steven Howard, David Howard, Mark Bloor and Brian Ambrose – have wowed audiences around the globe and are this year headlining shows in America, Germany and Norway.

Lytham Festival Director Peter Taylor said: “This is going to be a really special night at Lytham Festival. The Mersey Beatles are a sensational band who perfectly capture the spirit and sound of The Beatles brilliantly.

“We cannot think of a better way to celebrate arguably the most important album ever recorded than by having Liverpool’s favourite, most authentic tribute to The Beatles perform Sgt Pepper live in its entirety.

“The second half will be a total Beatles party packed with the hits we all know and love. We’d advise Beatles fans to get their tickets now because this is going to be a night to remember!”