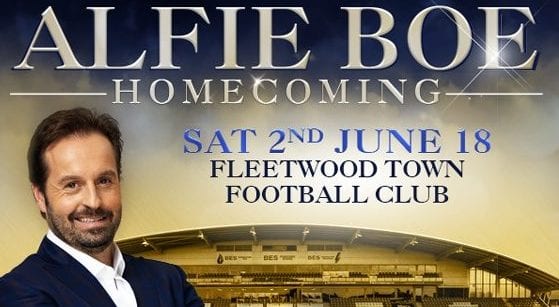 International singing star Alfie Boe is to return to his hometown for a special one-off concert.

Homecoming will be the biggest concert Fleetwood has ever hosted and will take place at Fleetwood Town FC’s Highbury Stadium on Saturday June 2.

And in a nod to Alfie’s roots, £2 from every ticket sold will be donated to the Fylde Coast’s Trinity Hospice, where Alfie is a patron.

Tickets to Homecoming go on sale at 9am Friday November 24 from www.ticketmaster.co.uk

Residents of Fleetwood and wider Wyre will be able to access an exclusive pre-sale on Wednesday November 22 by registering at cuffeandtaylor.com/events/alfieboe

Speaking about the concert Alfie said: “Being Fleetwood born and bred and a fully-fledged member of the Cod Army it’s an honour and a privilege to be performing back in my home town and at my team’s home ground.

“I hold Fleetwood close to my heart and I’m so happy to be coming back to entertain family and friends.”

The UK’s most beloved tenor was celebrated in his hometown earlier this year as part of BBC Music Day when a plaque was unveiled at Marine Hall – the theatre where he made his stage debut at the age of 14 in 1987. Alfie joined the likes of John Lennon, Paul McCartney, David Bowie and George Michael to be honoured in this way recognising pioneering musicians around the UK.

Since that first appearance in Fleetwood 30 years ago, Alfie’s unmistakable voice has cemented him as Britain’s biggest selling and best loved vocalist of his generation.

A hugely successful recording artist, he has conquered the world’s greatest stages and arenas. As accomplished in leading the cast of Les Misérables as Valjean in both the West End and Broadway, to stealing the show at this year’s BBC 100th Anniversary special to mark the Battle of Passchendaele, or taking the lead role of Jimmy, alongside Pete Townsend and Billy Idol, in The Who’s ‘Classic Quadrophenia”.

Homecoming is presented by North West live music promoters Cuffe and Taylor who have taken the decision to donate money from every ticket sold to the Fylde Coast’s Trinity Hospice.

Head of Fundraising Linzi Young said: “This is quite incredible news for the Hospice. Our friends at Cuffe and Taylor are long standing supporters through their local events and the annual Lytham Festival. Their generosity in allowing us to benefit from this very special concert means so much to us and the money raised will help pay for patient care, not just in the hospice but across the entire Fylde Coast community.

“And what can we say about Alfie Boe? He has been our Patron for five years and has helped us launch various fundraising campaigns, has sent videos of support for events such as our annual Ball, and has also sent private messages to some of our patients and their families facing very difficult circumstances. He is a man with a big heart, as well as a big voice. His global fan base is a window on the world for us; fans from across all continents get involved and send donations to Trinity in his name. We feel very privileged indeed to have the support of Alfie and his team.”

Tickets to Alfie Boe Homecoming are available from £30 and go on sale at 9am Friday November 24 from www.ticketmaster.co.uk

Residents of Fleetwood and wider Wyre will be able to access an exclusive pre-sale on Wednesday November 22 by registering at cuffeandtaylor.com/events/alfieboe