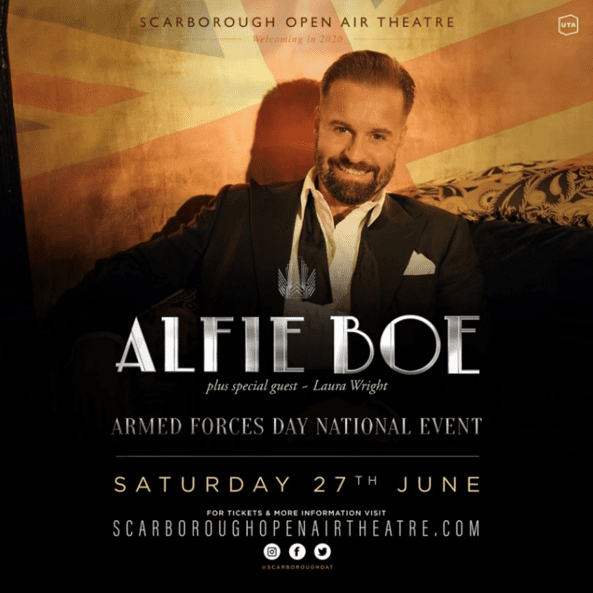 Alfie Boe is to provide a thrilling climax to this year’s Armed Forces Day with a sensational concert at Scarborough Open Air Theatre.

The nation’s gaze will be on Scarborough on Saturday June 27 when the historic Yorkshire coast resort has the prestigious honour of being the host town for this year’s Armed Forces Day National Event.

An estimated 200,000 people – including leading politicians and members of the Royal Family – are expected to head to the resort for a series of events that will honour the dedication and sacrifice of the nation’s servicemen and women.

And Armed Forces Day 2020 will be brought to a close in style as superstar tenor Alfie Boe delivers unmissable concert at the Open Air Theatre. Tickets for the event go on sale via scarboroughopenairtheatre.com at 9am on Friday February 21.

Chart-topping mezzo-soprano Laura Wright, who has performed at major events around the world, will be among those to join Alfie on stage for what will be a moving and magical evening.

Alfie said: “It is an amazing honour, as well as a huge thrill, for me to be back at this wonderful venue to perform on Armed Forces Day.

“I’ve played this venue many times and I’ve always received such a warm welcome from the good people of Yorkshire. The fact I will be performing as part of Scarborough’s hosting of Armed Forces Day’s National Event will make it even more special.  I cannot wait for June 27 – it will be an amazing evening.”

Alfie has conquered the world’s greatest stages and arenas as the star of such legendary stage productions as Les Misérables and La Bohème – together with his own sell-out concert tours. His unmistakable voice has cemented him as one of Britain’s biggest selling and best loved vocalists.

And he is no stranger to Scarborough OAT having previously headlined Armed Forces Day concerts at the venue, in 2015 and 2018, as well as performing there alongside his good friend and musical collaborator Michael Ball in 2017.

Last November, and for the first time since 2015, Alfie returned to the solo spotlight with the release of his vibrant and instant classic As Time Goes By – an album that celebrated the golden era of music from the 1930s and 40s.

Boasting Alfie’s voice at its strongest, and performing alongside Grammy award winner Gordon Goodwin and his Big Phat Band, As Time Goes By journeyed through the defining songs of the era, from the full force of Sing Sing Sing, through to slower, smoother numbers The Way You Look Tonight and the legendary title track.

Alfie will be singing songs from As Time Goes By, together with a host of other classics when he takes to the Scarborough OAT stage on June 27.

Laura Wright’s stunning Number One debut album The Last Rose has made her one of the biggest selling classical artists of the last decade. She is currently writing and recording her 7th album.

At the age of 24 she composed the Invictus anthem Invincible for Prince Harry and went on to write the official anthem for Women’s Cricket two years later. She wrote Brave for the Military Wives and became the first ever ‘official singer’ of the England Ruby team. Laura has performed at prestigious events such as the Rugby World Cup, NFL series, The Grand National, Royal Ascot and the FA Cup Final.

The Armed Forces Day concert is presented by Scarborough OAT programmers Cuffe and Taylor. Director Peter Taylor said: “Alfie is massively popular and is someone we are asked to bring back every year, so we are delighted to be welcoming him back to Scarborough OAT this summer.

“Saturday June 27 will be an extra special night as the nation’s focus will be on Scarborough. It is such an honour to host the Armed Forces Day National Event and so we really could not think of anyone better to headline this concert than Alfie who will be joined by the wonderful Laura Wright.

“It will undoubtedly be an incredibly moving and special concert and, we feel, the perfect climax to a day that celebrates the dedication and sacrifice of our Armed Forces.”

Tickets for Alfie Boe’s Armed Forces Day concert go on general sale at 9am on Friday, February 21 via www.scarboroughopenairtheatre.com. They can also be purchased, in person, from Scarborough Open Air Theatre Box Office (01723 818111) and the Discover Yorkshire Coast Tourism Bureau (01723 383636)

For more information, and a full lists of Armed Forces Day 2020 events in Scarborough, go to www.scarborougharmedforcesday.co.uk