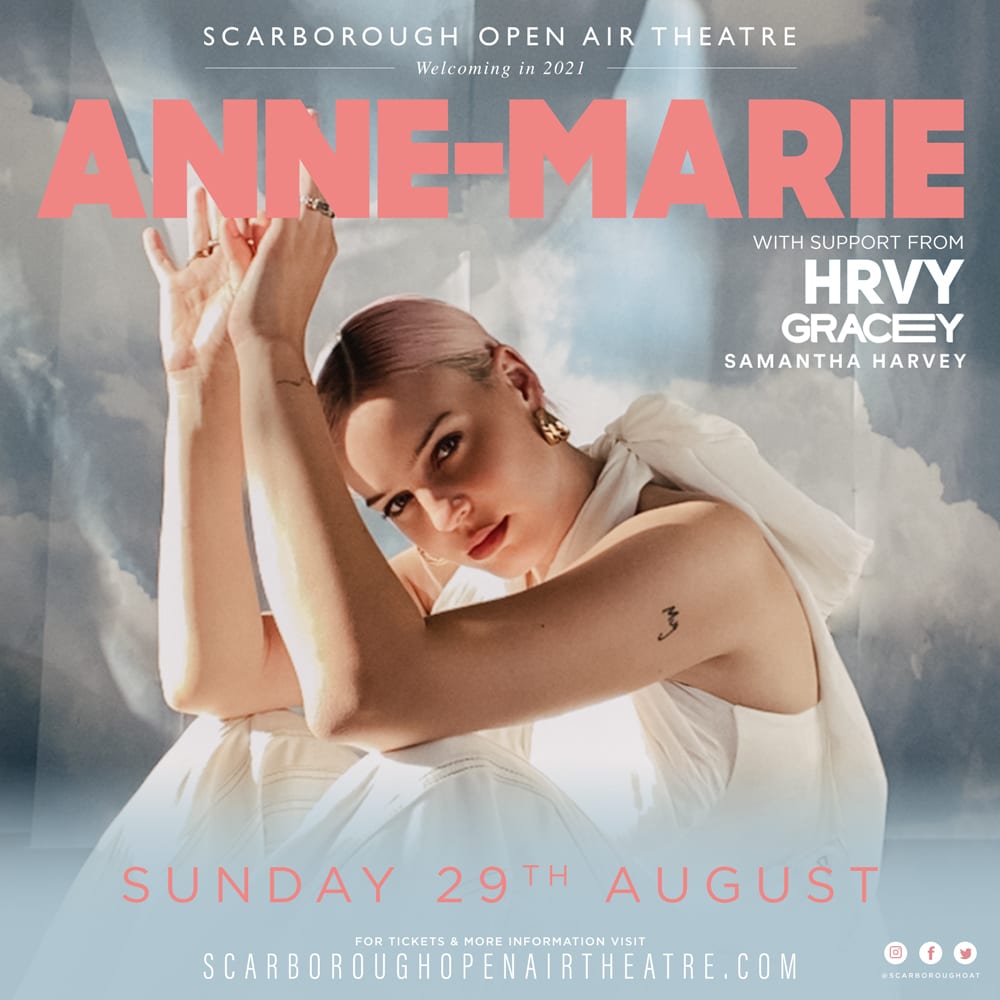 Global pop star ANNE-MARIE is heading to the Yorkshire coast this summer for a headline show at the UK’s biggest open-air arena.

The chart-topping singer-songwriter and nine-time BRIT Award nominee will bring her high-octane and empowering brand of pop to Scarborough Open Air Theatre on Sunday August 29.

HRVY,  GRACEY and Samantha Harvey join Anne-Marie on the bill for what promises to be a sensational August Bank Holiday show. Tickets go on general sale at 9am on Friday April 2 via ticketmaster.co.uk

Anne-Marie’s rise to stardom has been nothing short of meteoric. A former West End child star, she has gone onto become one of the world’s most-loved and successful, pop artists of recent years, with four UK Top 10 singles and 4.5 billion global streams to her name.

A swarm of relatable chart gems – including her breakthrough hit ‘Alarm’, the Number 1 Clean Bandit and Sean Paul smash ‘Rockabye’, and her Ed Sheeran collaboration ‘2002’ – have cemented her place as a ubiquitous, unshakable, and undeniable voice in pop music worldwide.

Last year’s comeback single ‘Birthday’ returned her to the Top 40 before ‘Don’t Play’ – her collaboration with KSI and Digital Farm Animals – hit Number 2 in the UK. Millions recently tuned in to see Anne-Marie’s debut Grand Final win as mentor on ITV’s The Voice.

With more than a billion combined streams to his name and a social media following of 10 million, HRVY has gone from singing in his bedroom to global star since signing his first record deal at just 15-years-old.

Hits like ‘Holiday’, ‘Phobia’, ‘Personal’, ‘Me Because of You’ and ‘Good Vibes’ have led to two sell-out UK and European tours and a new global record deal with BMG.

GRACEY is one of the most-talked about young artists around. A Platinum-selling songwriter since the age of just 16, writing for the likes of Rita Ora, Olly Murs and Kylie, GRACEY’S 2020 breakthrough collaboration with 220 Kid ‘Don’t Need Love’ was a UK Top 10 smash.

Follow-up ‘Empty Love’, a collaboration with Australian singer Ruel, assured her growing popularity before the release of her second EP ‘The Art of Closure’.

Samantha Harvey is a singer, songwriter and one of the UK’s top social media stars. Her singles ‘Forgive Forget’, ‘Please’ and ‘Get to Know You’ have amassed millions of streams and Radio 1 playlisted. On top of her own sold-out UK tour Samantha has supported the likes of Nick Jonas, Craig David and Rita Ora.

This unmissable Scarborough OAT line-up is presented by Cuffe and Taylor. Promoter Peter Taylor said: “We are absolutely delighted to announce a headline show this summer with Anne-Marie, supported by HRVY, GRACEY and Samantha Harvey.

“Anne-Marie has had hits around the world, and we’ve had so many requests to bring her here to Scarborough OAT. This is not only going to be a very popular announcement but one of the must-see shows of the summer.”