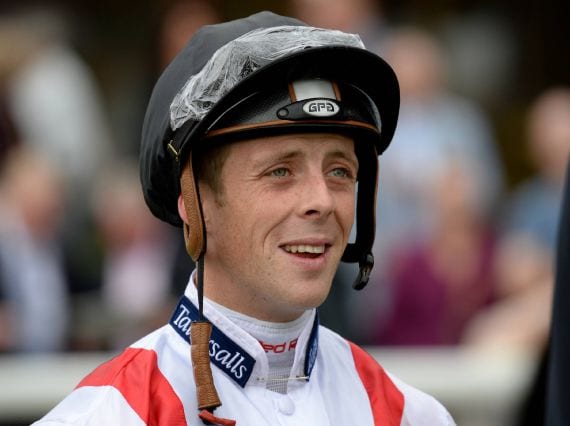 Ben Curtis returns to the happy hunting ground of Carlisle Racecourse on Monday aiming to end another hugely successful Cumbrian flat racing season on a high.

The former Champion Apprentice Jockey has eight winners to his name this season at Carlisle and has five rides booked at the Durdar course for Monday’s season finale.

Curtis will be looking to follow up his recent doubles at Carlisle on August 29 and again last Tuesday when he led Wax and Wane and King’s Pavilion to victory for Karl Burke and David Barron respectively.

Curtis rides Red Star Dancer for Barron in the Watch Racing UK On Youview Now Handicap as well as three rides for JP Murtagh in the shape of Hague Convention, For The Rose and Les Arceaux, who last won back in June at Gowran Park.

With his nearest rival Paul Mulrennan not at the meeting, a win for Curtis on Monday will mean he will finish the season as leading jockey at Carlisle – the course where he posted an 80/1 treble in May and a sensational four-timer in 2015.

In the trainer stakes, Keith Dalgleish, who leads the way with eight wins at Carlisle this season, has three runners – Chookie Valentine, Lil Gem and Rock N Rolla.

Nearest rival Richard Fahey has seven entries, including Rubis who last won in June at Ayre, and Flyboy, who finished third last time out at Carlisle.

Tim Easterby and Michael Dods, who have six winners each at Carlisle in 2017, have half a dozen runners between them.

Four of Easterby’s entries are rides for Rachel Richardson, including five-year-old Parole who was an impressive winner at Carlisle’s #AmazingMonday all-female jockey meeting on August 7.

Geraldine McKay, General Manager of Carlisle Racecourse, said: “It has been another great flat season here with many highlights.

“Our historic Bell and Plate meeting in June was superb. We then welcomed more than 11,000 people here for racing and live music with Jess Glynne in July and #AmazingMonday was just that – an amazing day of racing.

“We end the flat season joined by so many of the people who have been part of the success through the year such as Ben Curtis, Rachel Richardson, Keith Dalgleish, Tim Easterby and Michael Dods.

“Preparations are now well underway for the start of our jumps season which gets underway on October 19th.”