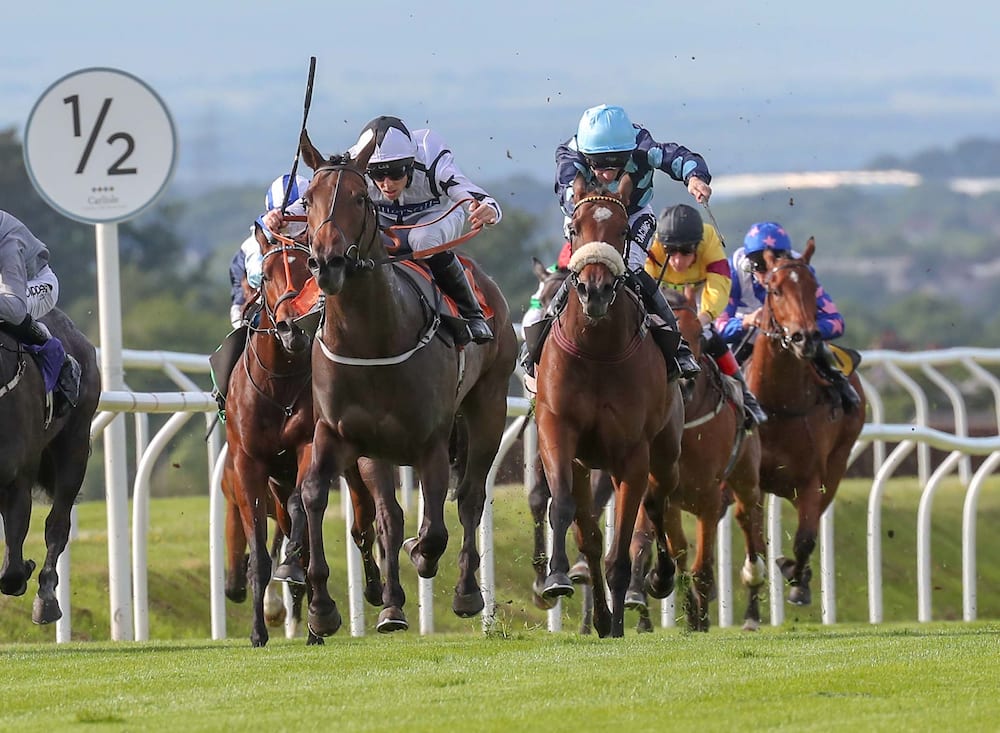 Carlisle’s reigning champion flat jockey Ben Curtis was doubly delighted on his return to the course with two wins from three rides.

Curtis has been the course’s top jockey twice in the last three seasons and wasted no time in getting back to winning ways.

He rode Little Kim to victory in the Carleton Fillies Novices Stakes before landing his double on board fellow Karl Burke-saddled Kelly’s Dino in The Racing UK Handicap Stakes.

Curtis will be looking to add to his winning record with his one ride in Friday’s meeting – Carlisle’s annual Feel Good Friday. The bumper eight-race card is followed by live music from top tribute act The Mersey Beatles.

After completing his double, Curtis, who has an incredible strike rate at Carlisle of one winner every four rides at the Durdar course, said: “It’s great to be back and great to get a couple of winners.

“They were good quality horses and it’s great for Karl and the team. My record was good here already but that certainly improves it!

“I’m looking forward to being back on Friday and here’s hoping (for another winner).”

Curtis was not the only jockey to land double joy on what was a glorious night bathed in Cumbrian sunshine.

Daniel Tudhope, who currently lies second in the flat jockeys’ championship, rode 9/2 shot Nate The Great (pictured above left) to a two-length victory for Archie Watson before leading French Resistance home in The Watch Racing UK In HD Handicap Stakes for Jed O’Keefe

Tudhope will also be well fancied when he takes charge of Angels in Friday’s biggest prize race, the Fillies Handicap over five furlongs. Tim Easterby’s three-year-old bay has won on her last two outings at Pontefract and Ripon over a slightly longer distance.

Challengers will include William Haggas’ Perfect Thought, racing for the first time since winning in November and Andrew Balding’s Foxtrot Lady, who led home last time out at Chester.

Elsewhere on the card, the Handicap for four-year-olds over 1m 6f will offer a chance to the duo of trainer Michael Dods and jockey Paul Mulrennan with Davy’s Dilemma. The gelding was good enough to be placed on his return at Doncaster last month after being a winner at Hamilton Park on his 2017 finale.

McDonald will then be one of four trying to land the 1m 3f Handicap for three-year-olds. His chance is Johnston’s Lucky Deal with Richard Fahey’s Sempre Presto a strong candidate.

Gates opening on Feelgood Friday at 11.30am. First race is at 1.30pm and the last at 5pm followed by live music from The Mersey Beatles. Adult tickets are £15 (in advance) or £18 (on the day). Under 18s free entry when accompanied by an adult.