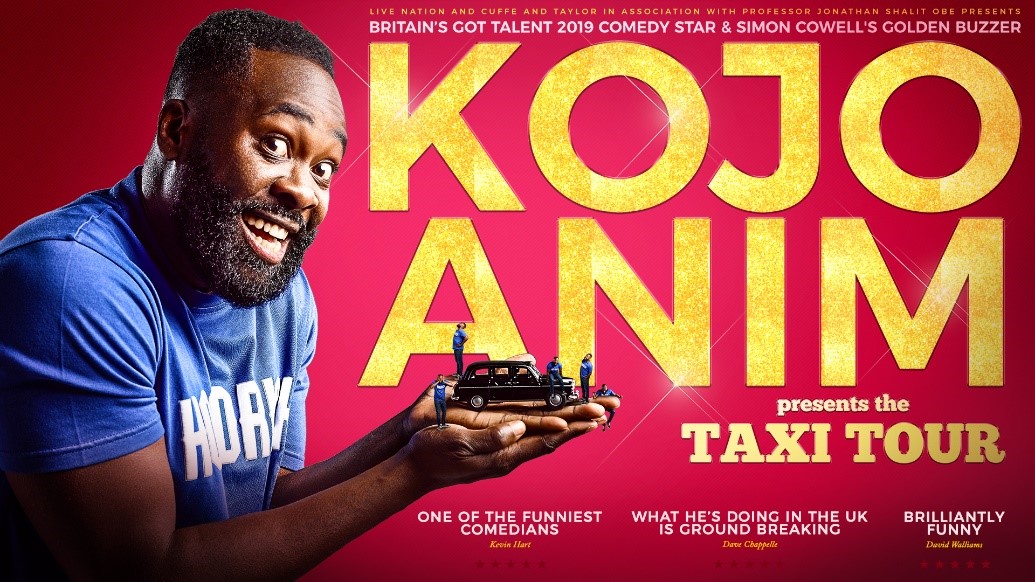 Britain’s Got Talent’s stand out stand-up comedy star Kojo Anim is heading out on the road with his debut UK tour.

The 39-year-old father of one was Simon Cowell’s golden buzzer act on this year’s series of the ITV talent show, winning through to the grand final earlier this month.

His new and exciting show Kojo Anim Presents The Taxi Tour will take in 26 towns and cities across the country, launching at Birmingham’s Alexandra Theatre on Thursday, February 6.

Born in Ghana, Kojo moved to London as a child and grew up in Hackney – and he’ll be returning to home territory for the final show of the tour at Hackney Empire on Friday, March 20.

Kojo is here to make the world laugh, sharing his funny observations and stories about life, parenthood and family.

Tickets go on sale on Friday, June 28 at 10am from www.cuffeandtaylor.com

With his infectious smile, and winning routines, Kojo Anim wowed the judges and audiences on Britain’s Got Talent.

Simon Cowell was so blown away by Kojo’s first audition routine he hit his golden buzzer to send him straight into the live semi-finals, saying: “I don’t really like comedians on this show… But I love you!” That first BGT performance alone has had more than 23 million views on YouTube.

Speaking about his BGT experience, and now announcing his debut UK tour, Kojo said: “For me, Britain’s Got Talent wasn’t about winning £250,000, it was a chance to get in front of the judges, and to prove to myself that I can perform in front of anybody.

“My goal was to make it to the final, and now here I am – announcing my first solo tour, something I’ve been working towards for 20 years.

“Since my first audition when Simon pressed the golden buzzer, my whole life has changed and now I can’t wait to jump in a taxi to travel the country making people laugh.”

Previous TV work includes CBBC show The Mighty Truck Of Stuff with Reggie Yates and MTV Base show The Fresh Prince Of Hackney. He has also hosted the breakfast show on radio station Capital XTRA.