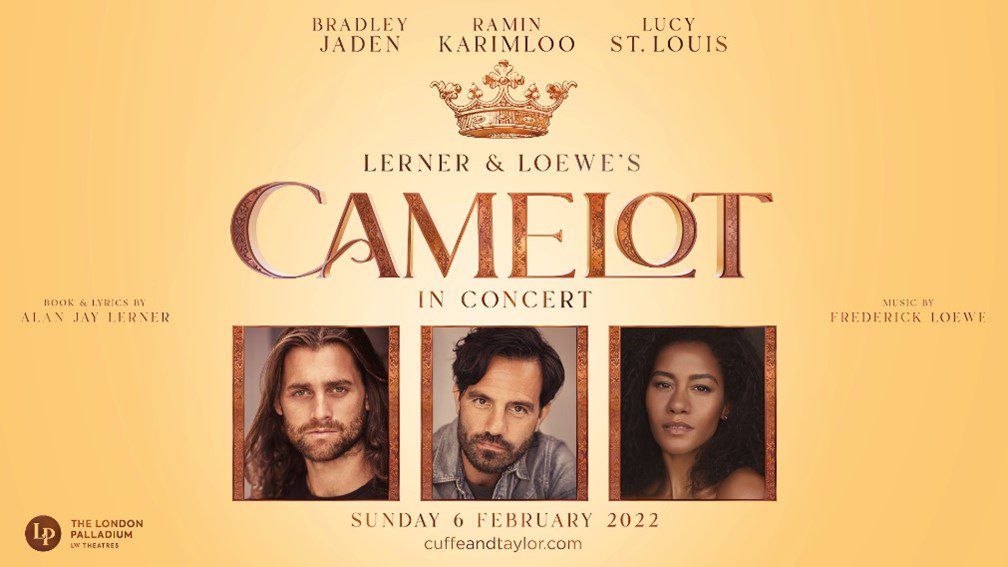 West End and Broadway royalty will lead the cast in an exclusive one night only production of Lerner and Loewe’s Camelot in Concert at the London Palladium.

Tickets go on sale 10am Friday July 30 and are available from www.cuffeandtaylor.com

Lerner and Loewe’s majestic musical Camelot brings the legend of King Arthur and his Knights of the Round Table to life with an extraordinary score that dramatizes this classic tale.

Speaking about taking on the role of King Arthur, Olivier and Tony Award nominee Ramin Karimloo said: “This is going to be a very exciting production and the fact it is for one exclusive night only makes it even more special.

“To perform as the majestic King Arthur and be joined by Lucy St. Louis as Guenevere and Bradley Jaden as Lancelot will make this an absolutely stunning show and I can’t wait.”

Camelot tells the story of Arthur, the idealistic King, who hopes to create a kingdom built on honour and dignity. His ideals, however, are tested when his lovely queen, Guenevere, falls in love with the young Knight, Lancelot creating one of the most famous love triangles in literary history.

From the writers of My Fair Lady, enjoy some of the most well-loved musical theatre songs including ‘If Ever I Would Leave You’, ‘I Loved You Once in Silence,’ and of course, ‘Camelot’ sung by the West End and Broadway star Ramin Karimloo (Love Never Dies, Les Misérables) as King Arthur, Bradley Jaden (Les Misérables) as Lancelot and Lucy St. Louis (Phantom of the Opera) as Guenevere – all accompanied by a full orchestra.

Camelot first opened on Broadway in 1960 starring Julie Andrews and the late Richard Burton. The production won four Tony Awards and resulted in several revivals and the 1967 movie of the same name. In August 1964, the show first opened at the Theatre Royal Drury Lane where it ran for more than 500 performances.

Camelot in Concert at the London Palladium is presented by live music and event promoters Cuffe and Taylor in association with theatre producers Lambert Jackson Productions.

Lambert Jackson Creative Director Eliza Jackson said: “Camelot in Concert is an incredibly exciting production for us and one that we know will be very special.

“With Ramin, Bradley and Lucy leading the cast as the legendary love triangle, we have the most incredible display of talent for this show, and we plan to announce more cast members soon.

“Lerner and Loewe created the most soaring music with wonderfully descriptive lyrics and to be given the opportunity to bring this story to life at the magnificent London Palladium is something we very much look forward to doing.”

Ben Hatton, Director of Theatre Touring for Cuffe and Taylor, added: “We are delighted to be working with Lambert Jackson and such a strong cast.

“This is an exclusive one-night only production and that means one thing – hurry to get your tickets as this is a not to be missed show.”

For more information and to secure your tickets head to www.cuffeandtaylor.com