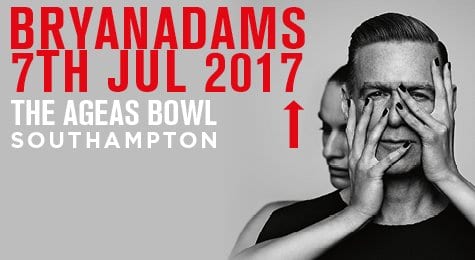 Rock legend Bryan Adams will head to Southampton’s Ageas Bowl in 2017 as part of his Get Up World tour.

It is announced today that the acclaimed singer-songwriter will headline at The Ageas on Friday July 7.

Tickets to see Bryan Adams at the Ageas Bowl go on sale at 9am Friday December 2 priced from £55 and are available from www.ticketmaster.co.uk

The Southampton gig is the first time the multi-platinum award-winning recording artist has played live in the city since 2009 and tickets are expected to be extremely popular.

The rock giant has been touring across the globe with his most recently launched thirteenth studio album Get Up and will entertain the crowds with a string of new hits (You Belong to Me, Brand New Day) together with such classics as Summer of 69, (Everything I Do) I Do It For You, Cuts Like a Knife and Run To You.

Hampshire Cricket Chairman, Rod Bransgrove, said: “This is great news for the Ageas Bowl as we continue to pursue our stated objective of becoming the South’s most prestigious concert venue.

“This promises to be an amazing night featuring one of the world’s most brilliant and enduring rock icons who is noted, particularly, for the quality of his live performances.”

The gig is being organised by promoters Cuffe and Taylor who brought Rod Stewart to The Ageas earlier this year.

Director Peter Taylor said: “We are absolutely delighted to be bringing Bryan Adams to the Ageas Bowl in 2017. The venue is a fantastic facility and one which we are sure will be absolutely bouncing to the sound of this Canadian rock legend.

“We presented a number of sell-out dates with Bryan Adams in 2016 so to be able to work with him again and at a venue we have already enjoyed a hugely successful concert in is great.

“Bryan Adams is a huge global star and we have no doubt this is going to be an amazing concert.”

Tickets to see Bryan Adams at the Ageas on Friday July 7 are priced from £55 and are available from www.ticketmaster.co.uk

The Ageas Bowl is also offering a range of hospitality packages priced from £150. For more details call 02382 027096 or email at hospitality@ageasbowl.com