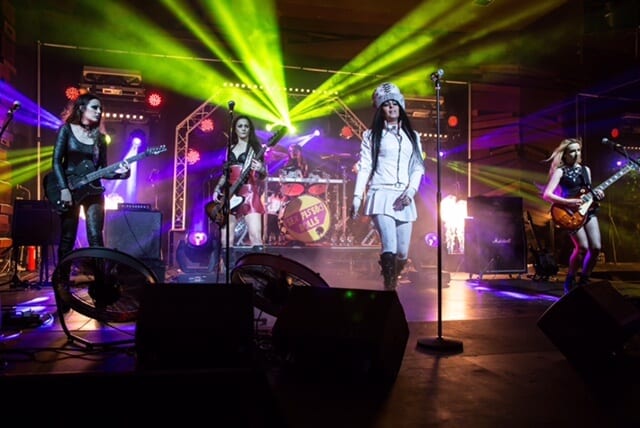 Celebrate 40 Years Of Punk With Double Header In Leafy Lytham

The usually quiet Lancashire seaside town of Lytham is to be anything but when it hosts a one-off gig celebrating 40 years of punk as part of Lytham Festival.

The Festival has expanded its music offering this year with a packed line-up across six stages throughout Lytham and runs from 1-7 August.

Bands The Dolls and Space will take to the Pavilion Stage in a musical explosion that is sure to keep the venue rocking on Wednesday 3 August.

Lytham Festival director Peter Taylor said: “Punk turned the country upside down 40 years ago when it swept the nation and we’re really looking forward to it doing the same at Lytham Festival this year.

“The Dolls offer an ear-splittingly loud sound that is guaranteed to get punk music lovers pogo-ing at the Pavilion, while many will have fond memories of Space from the 90s music scene.

“We have worked really hard this year to select an eclectic line-up for this year’s Festival that will cater to all musical tastes and we’re sure that people will love what we’ve got in store for them.”

The Dolls are an all-girl five piece whose punk credentials are second to none and are coming to Lytham as part of their 2016 Daughters of Anarchy Tour. Formed in 2014 the band, like many others, started out covering songs they loved.

Spaceformed in 1993 in Liverpool and are one of the longest running bands performing at this year’s Festival. Best known for their hits Female of the Species, Me and You Versus The World and Avenging Angels, they are no strangers to the festival scene with stacks of appearances over the years. They also famously dueted with Cerys Matthews from Catatonia with a special tribute to everyone’s favourite Welsh singer titled The Ballad of Tom Jones in 1998.

The Dolls and Space play the Pavilion Stage at Lowther Pavilion on Wednesday 3 August (£25.50).

A host of other artists will also will also perform throughout the Festival’s fringe events across five stages throughout the week. Highlights include London based pop-rockers Room 94 at Stage Too and Lawson at the Pavilion Stage, plus much more besides.

There will also be special outdoor film screenings of The Rocky Horror Picture Show and Labyrinth at Lytham Hall and the UK’s largest ever seaside cinema screening of Star Wars: The Force Awakens at the Lytham Green Proms Arena.

Tickets are on sale to all Lytham Festival events now and more events will be announced in the coming weeks.

The Lytham Festival Box Office will open in Lytham Piazza from Sunday June 26.