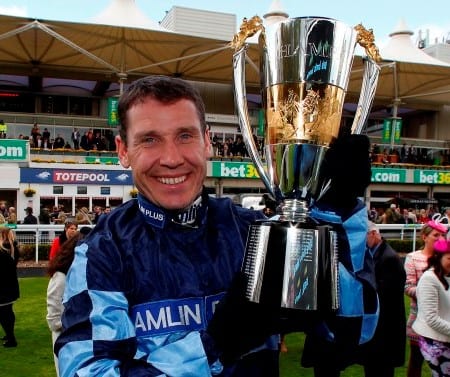 Champion Jockey Richard Johnson will go head-to-head with one of the main challengers to his crown in what promises to be a sizzling November 5th meeting at Carlisle.

Johnson – champion in 2015 and 2016 – has ridden 88 winners this year and will be looking to add to that tally with four runners at Carlisle’s annual Cumberland Chase meeting on Sunday.

They include Chef D’Oeuvre in the historic Cumberland Handicap Chase which also features Sam Twiston-Davies on board Templecross. Twiston-Davies is third in the Stobart Jump Jockeys Championship with 64 winners to his name in 2017.

Sherwood is no stranger to Carlisle as he trained the great Many Clouds – winner of both the 2014 Colin Parker and the Grand National in 2015.

Blameitalonmyroots is Sherwood’s entry in the Cumberland Chase. The seven-year-old, who has four wins from 14 outings, was an impressive winner at Kempton Park in February.

Fellow Grand National winner Lucinda Russell has three entries on Sunday’s card – Sammy B, who enjoyed a three-race winning streak earlier this year with successes at Musselburgh, Kelso and Haydock, together with Celtic Flames and Sky Kahn. All three will be ridden by National winning jockey Derek Fox.

The headline race of the day – the Colin Parker Memorial Intermediate Chase – will again be hotly contested with owners and trainers using it as a real test for their Class One horses ahead of the Grand National and Cheltenham Festival.

Malcolm Jefferson’s Waiting Patiently will be going for glory in the race after winning his last three races over fences. The six-year-old has not finished outside the top two in all six of his races to date.

He will be up against French six-year-old made Belami Des Pictons, who made it five wins from his last six starts when cantering home by 33 lengths at Leicester in February, and Nicky Richards-trained Baywing whose last victory came at Wetherby in February when he romped home by an impressive 25 lengths.

This Sunday should be a red-hot November 5th meeting in more ways than one with a cracking day of National Hunt action on the track and plenty of Guy Fawkes-related family fun held alongside it.

Attractions include pony rides, pyro arts and crafts, a series of ‘Mad Science’ shows and a post-racing bonfire. And the great news is children get in ABSOLUTELY FREE!

Geraldine McKay, Carlisle Racecourse’s General Manager, said: “The Colin Parker is our Blue Ribband jumps event and we are delighted to see another cracking list of entries this year.

“The race certainly does breed the stars of the future with many of the horses who have triumphed in the Colin Parker going on to great success at Aintree and Cheltenham.

“The meeting always draws racing fans from around the country and we expect another great day of top quality jumps racing.

“And alongside the track we have a host Guy Fawkes-themed fun for all the family as well as a post-race bonfire. What makes days like this so wonderful is, as with all our race meetings, under-18s get in absolutely free.

“We can’t wait for another fantastic day of racing and fun for racegoers young and old.”