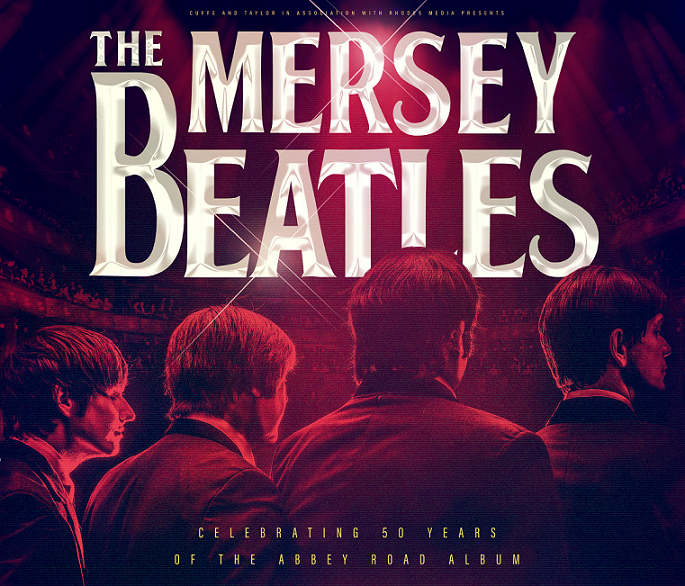 In a show that is already wowing sell-out audiences across the globe, the world-renowned Liverpool-born Beatles tribute band will play the classic 1969 album in full – followed by a spectacular set of John, Paul, George and Ringo’s greatest hits.

Tickets go on sale at 10am on Friday March 29th via www.cuffeandtaylor.com

Abbey Road – which features such stunning tracks as Come Together, Something, Here Comes the Sun, and the ground-breaking 16-minute album closing medley – is regarded by many fans and critics alike as The Beatles’ greatest LP.

And it is brilliantly brought to life by The Mersey Beatles who exude the inner and outer spirit of the real thing, from the costumes, instruments, Scouse charm and, of course, that unmistakable era-defining, Liverpool-born sound.

Formed in 1999, The Mersey Beatles – Mark Bloor (John), Steven Howard (Paul), Craig McGown (George) and Brian Ambrose (Ringo) – were the resident Beatles’ band at Liverpool’s legendary Cavern Club for more than a decade where they racked up more than 600 gigs.

Since leaving The Cavern, they have toured the world many times over – winning legions of fans and plaudits including John Lennon’s own family.

Their 2019 World Tour sees them play theatres and festivals across America, Australia, the Far East, Asia and Europe.

Steven said: “This year is both our 20th anniversary and the 50th anniversary of Abbey Road so we wanted to give Beatles’ fans something really special.

“Abbey Road is regarded by many as one of the Beatles best albums, if not the best. However, as The Beatles stopped touring in 1966, they never played these amazing songs to a concert audience. Fans today rarely, if ever, get chance to hear this amazing album played live in full.

“It went down a storm on our recent sell-out US tour and we can’t wait to bring this all-new show – which mixes both Abbey Road and songs from The Beatles entire catalogue –home to the UK.”

Every Mersey Beatles concert is a hit-packed celebration of the greatest band of all-time, from the ‘Mop Top’ hits of Beatlemania, through the psychedelic creativity of Sgt Pepper to the melodic wonder of the Fab Four’s later work.

Mark added: “It’s a real privilege for us, as a band from Liverpool, to tour the world and play these amazing songs to Beatles’ fans of all ages.

“Every show is a joyous celebration of the best band of all time and, in my mind, the greatest songs ever written. We can’t wait for the UK leg of the tour to begin – these will be amazing shows.”

Tickets for The Mersey Beatles UK Tour go on sale at 10am on Friday March 29th via www.cuffeandtaylor.com