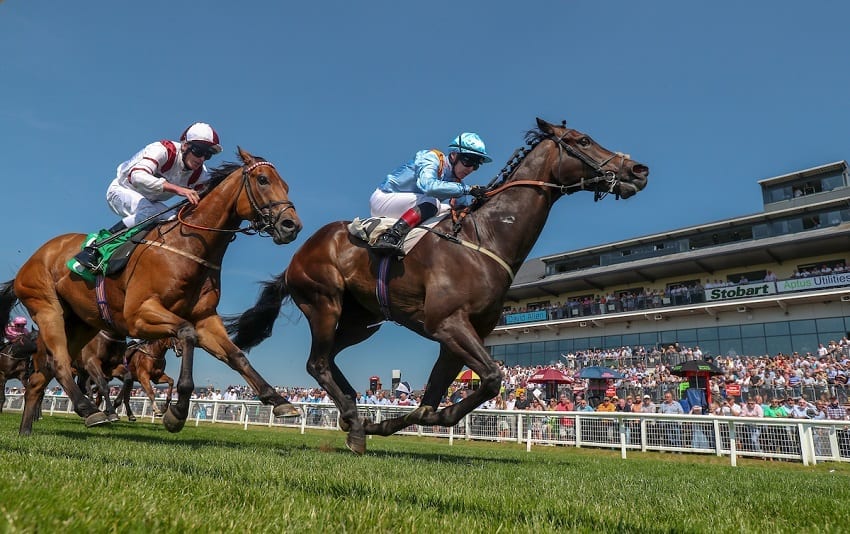 Apprentice jockey Conor McGovern announced his arrival in England in some style as he landed one of the most historic prizes in racing – The Carlisle Bell.

The 22-year-old County Monaghan jockey claimed his first ever winner on English turf by leading 6/1 shot Waarif to a superb three-quarter-of-a-length victory in the famous race which dates back to 1599.

The David O’Meara-saddled five-year-old was very strong in the final two furlongs to hold off the challenge of Raselasad and Presidential.

After the race, Conor, surrounded by a large group of happy owners, said: “It’s a big race, an historic race so it couldn’t have gone any better. It’s a proud moment to get a ride in The Bell let alone win it.

“I felt Waarif had a chance today, he has been running consistently and he was always in with a shout.

“A furlong to go he was batting on. He’s quite strong in the finish and he will always do what he can to help you – he gives you everything he can.

“It’s a great day for the owners and it’s brilliant that we could pull it off.”

McGovern is the first apprentice to win The Bell since 2012 when Willy Twiston-Davies won on Levitate.

The second feature race of the day The Cumberland Plate was won by Tim Easterby’s heavily-backed favourite Aasheq. The five-year-old was always in control of the 1m 3f race under the control of David Allam.

Another horse that was always in control was Richard Fahey’s Dance Diva in the £40,000 Class One Eternal Stakes.

It was a one-two for the Fahey yard as Dance Diva, ridden by Paul Hanagan, was pushed all the way to the line by stablemate Clubbable ridden by Tony Hamilton.

Fahey, who won The Carlisle Bell in 2017 with Carnageo, said: “Both are strong fillies who have been riding consistently well.

“It’s a good result. We knew Dance Diva had a very good chance and she has run solid all year. She has run at the highest level all her life and on the day it is job done and we are very pleased.”

Elsewhere on the card, Ben Curtis – this course’s leading jockey – led from start to finish on David Loughnane’s Baby Steps to land the 5f Edmundson Cabletech Carlisle Novice Auction Stakes and take his winning tally to six for the season.

Molly Dingwall, Carlisle Racecourse’s General Manager, said: “It has been a brilliant day.

“The weather has been sensational, temperatures have topped 30 degrees and it was lovely to see thousands of people here on our most historic race day.

“We are delighted for Conor McGovern and David O’Meara winning The Bell. It was great to see a young apprentice claim such an historic race

“We are back racing on Saturday July 7 when Paloma Faith will be delivering a great after-racing concert. This is going to be another wonderful day at Carlisle Racecourse and we cannot wait.”