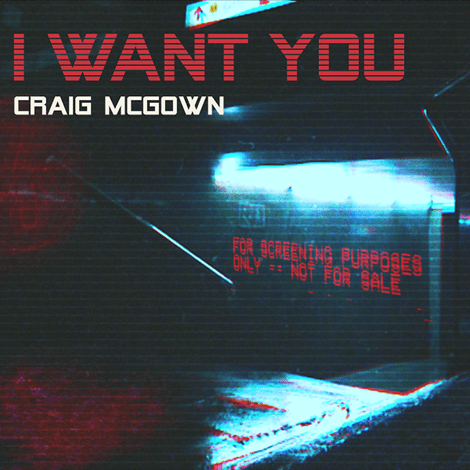 CRAIG MCGOWN RETURNS WITH NEW SINGLE ‘I WANT YOU’

Craig McGown is back with his stunning new single I Want You – the exquisite third instalment of a mesmerising dark electro pop trilogy.

I Want You is released on all DSPs on Friday April 23.

It’s true Lockdown has done strange things to the sanest people – just ask Craig McGown. There he was, happily circumnavigating the world as a hugely respected touring guitarist, and then March 2020… suddenly no more live shows.

Holed up at home and, after tiring of endless home improvement projects, shifts at his local supermarket and countless Zoom nights in, Craig did something he’d never done before – he went and got himself a Roland Juno synth.

This God-like slab of early 80s electronica has been quite simply a game changer for the Bellshill lad raised on such local heroes as Teenage Fanclub, BMX Bandits and The Soup Dragons.

Craig explained: “I really wanted to try something musically I’d never done before – and that basically meant putting my guitar down.

“The whole process has been really cathartic. For I Want You I wanted to make an 80’s pop song that could’ve been on Giorgio Moroder’s Scarface soundtrack. I know, it’s a big ask, but this is what I came up with and I’m really happy with it.”

After Parallels was picked up and championed by BBC Introducing Scotland, it
is fair to say Craig – a true stalwart of Glasgow’s indie scene – has found himself
re-energised and ready for action.

“A complicated new frontier, the start of something real,” he sings in I Want You – a prophetic line as true for himself as a songwriter in 2021 as it is for his song’s loved-up protagonist.

Is this Synthwave? Is this Retrowave? Who cares?

I Want You is just a damn good pop song that traverses the decades and doffs its cap to OMD, Depeche Mode and New Order through to latter day Arctic Monkeys along the way.

And the great news is it is released to the world on April 23.