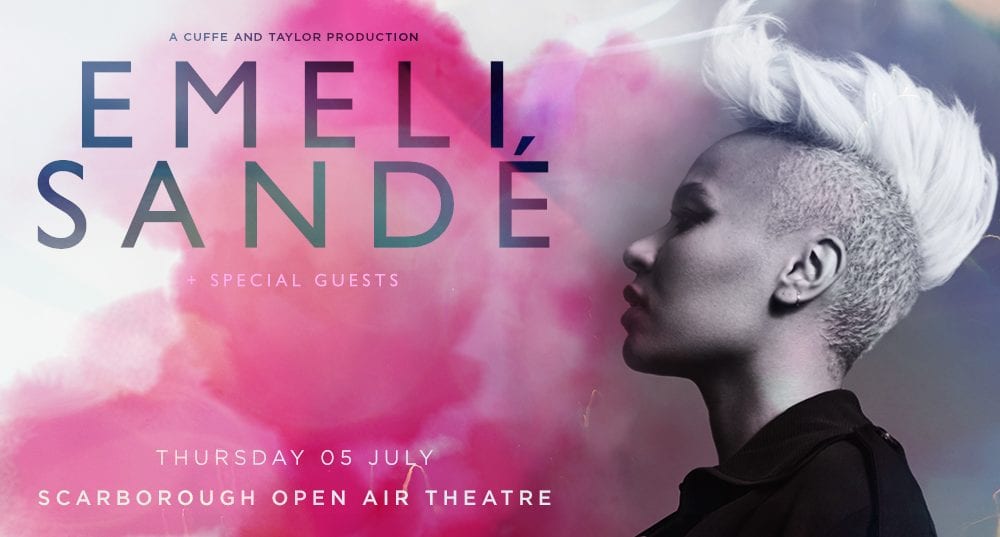 Emeli – whose global hits include ‘Read All About It’, ‘Next To Me’, ‘My Kind of Love’ and ‘Clown’ – will play Scarborough Open Air Theatre on Thursday July 5.

Emeli burst onto the scene in 2009 with Top 10 hit ‘Diamond Rings’, her stunning collaboration with Chipmunk. She scored further chart success with DJ and rapper Naughty Boy before claiming her first number one – the smash-hit ‘Read All About It’ with Professor Green.

Her multi-platinum-selling debut album ‘Our Version of Events’ catapulted Emeli to worldwide acclaim, before her ‘Live At The Albert Hall’ album also topped the charts.

In 2012, Emeli performed at both the Opening and Closing ceremonies of the London Olympics. She won two Brit Awards in 2013 for Best British Female Solo Artist and British Album of the Year.

Emeli‘s second studio album ‘Long Live the Angels’ – featuring the global smash-hit single ‘Hurts’ – was released in 2016. In 2017 Emeli received the Brit Awards’ Best British Female Solo Artist award, becoming her fourth win in total, while she was appointed Member of the Order of the British Empire (MBE) in the 2017 Birthday Honours for services to music.

Emeli‘s show at Scarborough Open Air Theatre is presented by Cuffe and Taylor. Director Peter Taylor said: “What can be said about Emeli Sandé which has not been said already? She is a global star whose songs have touched millions of people around the world.

“This is a major coup for Scarborough and Emeli joins what is quite simply the best summer line-up Scarborough OAT has ever seen.”

Tickets for Emeli Sandé at Scarborough OAT go on general sale at 9am on Wednesday February 21 from www.scarboroughopenairtheatre.com or from Scarborough Open Air Theatre Box Office (01723 818111) and the Discover Yorkshire Coast Tourism Bureau (01723 383636). To access exclusive pre-sale tickets – 24 hours before general sale – go to