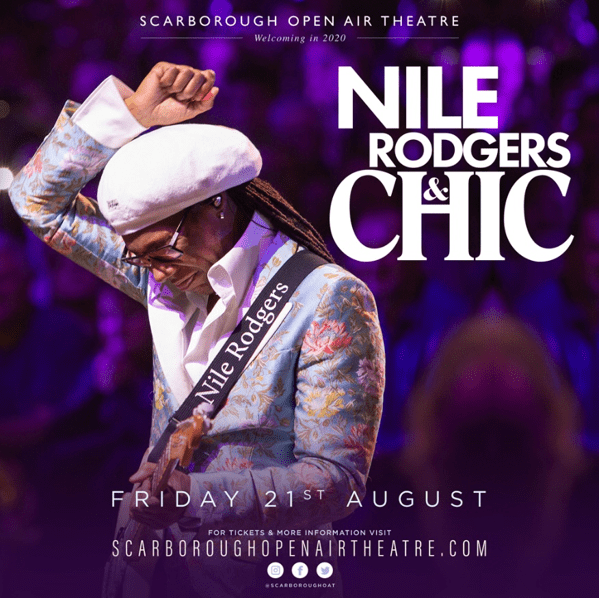 EVERYBODY DANCE… NILE RODGERS & CHIC ARE RETURNING TO SCARBOROUGH OAT

The undisputed Kings of Disco Nile Rodgers & CHIC are returning to the Yorkshire coast for what promises to be this summer’s ultimate party night.

The legendary hit-makers will play a headline show at Scarborough Open Air Theatre on Friday August 21.

Tickets go on sale at 9am on Friday (March 13) via scarboroughopenairtheatre.com

Nile Rodgers is a multiple Grammy Award-winning composer, producer, arranger and guitarist with more than 200 production credits to his name. He is constantly traversing new musical terrain and successfully expanding the boundaries of popular music.

As the co-founder of CHIC, he pioneered a musical language that generated chart-topping hits such as Le Freak, Good Times and Everybody Dance that sparked the advent of hip-hop.

Nile Rodgers & CHIC are no strangers to Scarborough Open Air Theatre having played a sell-out show at the venue in 2018.

Nile said: “As most people know the UK is my home from home. Myself and CHIC had a brilliant time when we played Scarborough OAT in 2018 and we cannot wait to come back again this summer. It’s going to be another amazing night – so bring your dancing shoes!”

Nile transcends all styles of music across every generation with a body of work that’s gained him inductions into the Rock and Roll Hall of Fame and the Songwriters Hall of Fame.

His work with CHIC and his productions for artists such as David Bowie, Diana Ross and Madonna have sold more than 500 million albums and 75 million singles worldwide. His innovative, trendsetting collaborations with Daft Punk, Avicii, Sigala, Disclosure and Sam Smith reflect the vanguard of contemporary music.

This unmissable Scarborough OAT show is presented by Cuffe and Taylor. Promoter Peter Taylor said: “Nile Rodgers & CHIC are global superstars and we are delighted to be bringing them back to Scarborough OAT.

“The show in 2018 was brilliant, Nile and CHIC never fail to get an entire arena on their feet dancing. This is going to be one of the highlights of the summer and I would strongly advise people to get their tickets now because you will not want to miss this!”

Tickets for Nile Rodgers and CHIC go on sale via scarboroughopenairtheatre.com or in  person, from Scarborough Open Air Theatre Box Office (01723) 818111 and the Discover Yorkshire Coast Tourism Bureau (01723) 383636.