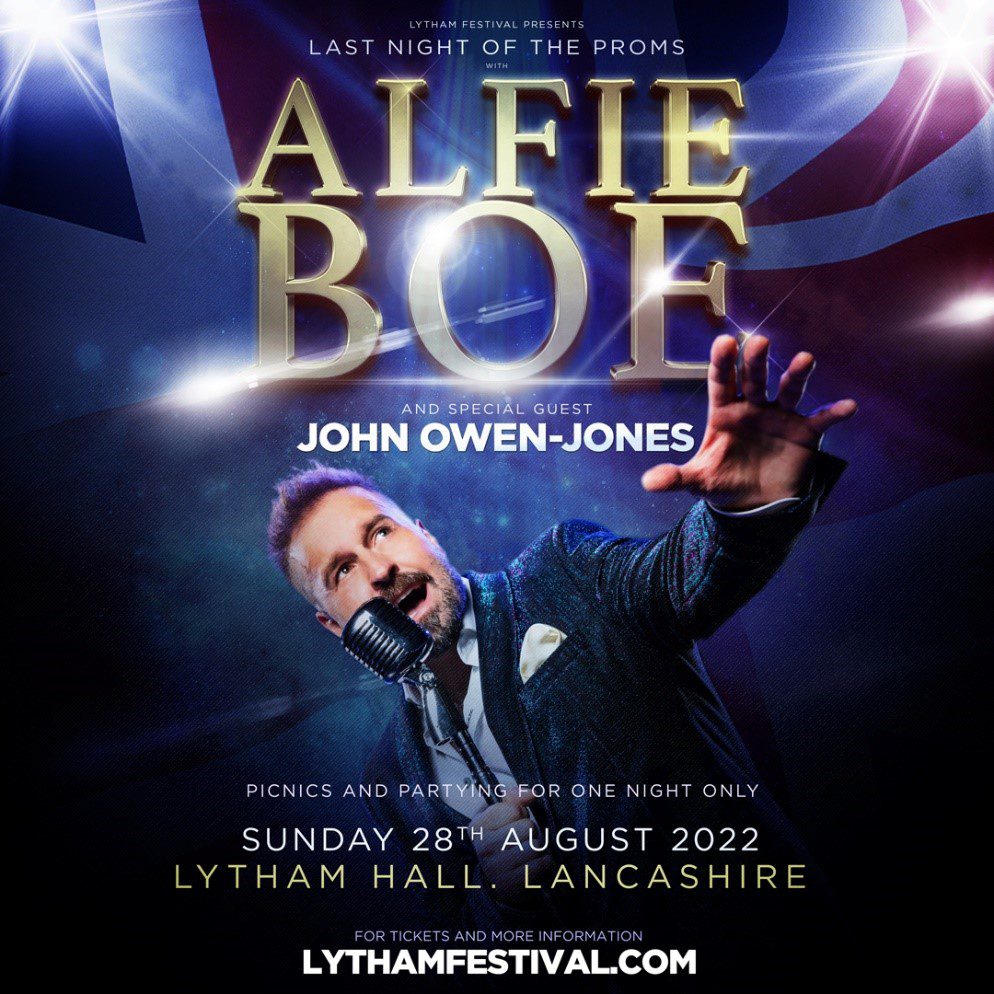 International singing sensation and Lancashire’s most famous tenor Alfie Boe is to headline a special Last Night of The Proms concert in Lytham.

Taking place in the grounds of historic Lytham Hall on Sunday August 28, the exclusive show will see Fleetwood-born Alfie perform alongside a full orchestra while the concert will be opened by special guest and fellow Broadway and West End star John Owen-Jones.

Last Night of The Proms is presented by Lytham Festival directors Cuffe & Taylor and follows the success of their WonderHall festival last summer which saw £153,000 donated to the continued restoration of Lytham Hall from the Russell Watson Proms concert. All money raised from Alfie’s spectacular will also be gifted to the Grade 1 listed venue.

Tickets go on sale at 9am this Friday from www.lythamfestival.com

Lytham Festival Presents Last Night of The Proms will be the first time Alfie has performed on the Lancashire coast since his sell-out Homecoming show at Fleetwood Town FC in 2018.

Speaking about his return, Alfie said: “I cannot wait to get back to perform on homeground. As a proud Lancastrian it will be very special for me and to stand in front of an audience which I am sure will have many familiar faces is just the icing on the cake.

“This will be a brilliant night in a magical setting and I look forward to seeing everyone there.”

Alfie’s unmistakable voice has cemented him as Britain’s biggest selling and best loved vocalist of his generation.

A hugely successful recording artist, he has achieved two Number 1 albums and amassed multi-million, multi-platinum record sales. Alfie has conquered the world’s greatest stages and arenas from leading the cast of Les Misérables as Valjean in both the West End and Broadway, the 25th Anniversary Concert and most recently the London Staged Concert, to taking the lead role of Jimmy in The Who’s Classic Quadrophenia, while also wowing audiences in theatre performances including La Bohème, Finding Neverland and Carousel.

Alfie will be joined on the evening by special guest and fellow tenor John Owen-Jones. John too is famous for his portrayal of Jean Valjean in Les Misérables in the West End and on Broadway – and still holds claim to being the youngest actor in history to have played the role. He has also played the title role in The Phantom of The Opera more than any other actor in the show’s West End history.

Peter Taylor said: “We have had the pleasure of working with Alfie on numerous concerts and tours over the years so we are delighted to have secured him for our 2022 Last Night of the Proms at Lytham Hall.

“He is beloved globally but the people of Lancashire and particularly our coastal towns feel a natural closeness to their locally born star.

“It is also exciting to have John Owen-Jones on the bill too. John is a wonderful talent and to have both Alfie and John performing on the same stage on the same evening will make this special for everyone.

Lytham Hall is managed by the Heritage Trust for the North West and all profit from Last Night of The Proms will be used for further restoration and projects at the heritage venue.
General manager Peter Anthony said: “We are absolutely thrilled Cuffe and Taylor are bringing yet another world-class artist to our fantastic Lytham Hall.

“The money raised by the Russell Watson concert was an incredible boost to enable our ongoing projects so to know we now have the benefit of an Alfie Boe concert to look forward to this summer is just wonderful.”

Lytham Festival Presents Last Night of The Proms is a picnic proms-style event.

Tickets go on sale at 9am this Friday from www.lythamfestival.com