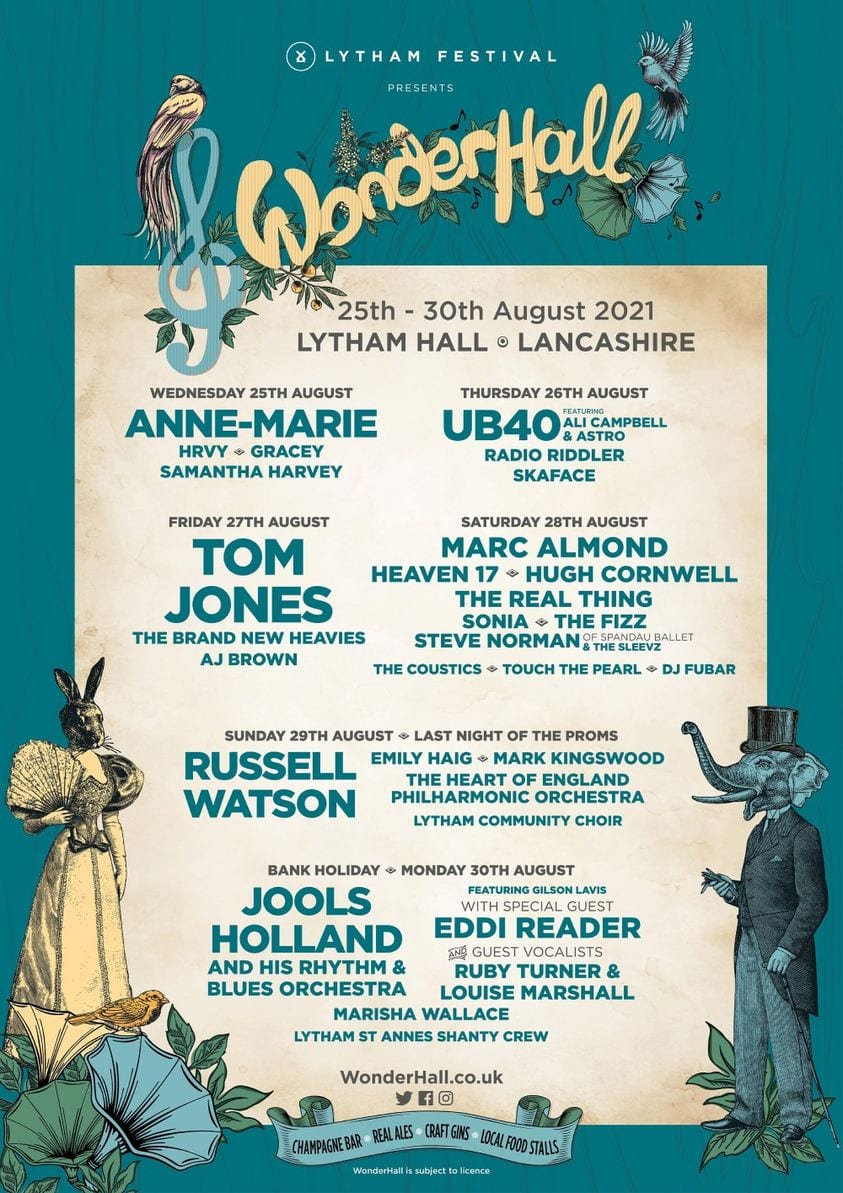 The line-up is announced as it’s revealed more than 30 artists will perform across the six-day festival taking place in the grounds of historic Lytham Hall from Wednesday August 25 to Bank Holiday Monday August 30.

Tickets go on sale at 5pm Thursday April 29 from www.wonderhall.co.uk

Launched by the team behind the hugely popular and successful Lytham Festival, WonderHall will kick off on Wednesday August 25 with global pop star Anne-Marie with support from HRVY, Gracey and Samantha Harvey.

Chart-topping singer-songwriter and nine-time BRIT Award nominee Anne-Marie’s rise to stardom has been nothing short of meteoric. A former West End child star, she has gone onto become one of the world’s best-loved and successful pop artists of recent years, with four UK Top 10 singles and 4.5 billion global streams to her name.

UB40 are one of the UK’s most beloved music institutions, achieving three UK Number Ones – Red, Red Wine, I Got You Babe (ft. Chrissie Hynde) and I Can’t Help Falling In Love with You – not to mention 17 Top 10 singles.

Since reuniting six years ago, founding members Ali and Astro – backed on stage by a fantastic seven-piece reggae band – have become a formidable touring outfit.

Tom performed to a sold-out Lytham Festival back in 2015 and with a career that has seen him sell in excess of 100 million records, he has won countless accolades including a BRIT Award for Outstanding Contribution to Music and a Silver Clef Award for Lifetime Achievement.

Saturday August 28 provides the ultimate party night headlined by Marc Almond along with a string of pop stars. Heaven 17, The Fizz (formerly Bucks Fizz), The Real Thing, Sonia, Hugh Cornwell (The Stranglers) and Steve Norman (Spandau Ballet) & The Sleevz will all join the party which will be opened with live sets from Fylde coast favourites The Coustics, Touch The Pearl and DJ Fubar.

The pomp and circumstance of the Last Night of the Proms will be celebrated on Sunday August 29 with a headline concert from celebrated tenor Russell Watson. He will be accompanied by The Heart of England Philharmonic Orchestra with support from soprano Emily Haig and big band jazz singer Mark Kingswood, while Lytham Community Choir will open the picnic-proms concert.

Since then, Russell has released a further 10 studio albums, performed for some of the world’s leading figures and at countless prestigious sporting events while also touring the world.

From playing pubs in the East End docks as a teenage greaser, to leading his rhythm and blues orchestra and selling millions of records this century, Jools Holland is one of the country’s most loved and respected musicians.

WonderHall director Peter Taylor said: “The line-up for WonderHall has been designed to ensure we appeal to as wide an audience as possible. We have a fantastic mix of artists across the six days from the world-famous legend that is Tom Jones to supporting the Lancashire music scene by having some local artists on the bill too.

“We absolutely cannot wait for the opening night of WonderHall to see people gathering to enjoy live music once again and to be doing that in the picturesque parkland of Lytham Hall will make this a really special event.”

Tickets are priced from £25 and go on sale at 5pm Thursday April 29 from www.wonderhall.co.uk