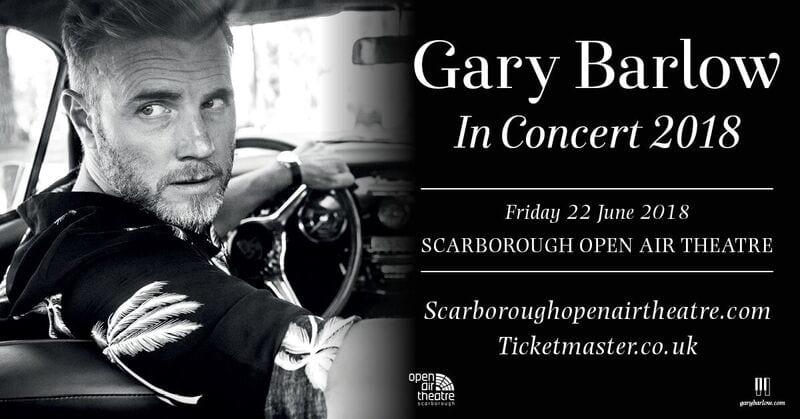 Tickets go on sale at 9am Friday November 24th via www.ticketmaster.co.uk

The tour – which kicks off in Edinburgh in April – will see Gary play venues across the UK and Ireland including some never visited before.

This will be Gary’s first visit to Scarborough OAT – Europe’s largest open-air theatre – but the Yorkshire coast resort already holds a special place in the multi-award-winning star’s heart.

He played Scarborough’s Futurist Theatre with Take That as part of the legendary Take That And Party Tour in 1992 – which catapulted the band to superstar status – and he returned to the same venue as a solo artist in 2013.

Most recently Gary, with friend Tim Firth, penned the song Scarborough for their West End musical comedy The Girls which is based on the famous story of Yorkshire’s WI ‘Calendar Girls’.

Gary last toured as a solo artist in 2014 to great acclaim from fans and critics alike, playing some of the biggest venues he had ever played including The O2 London, Birmingham LG Arena, Glasgow The SSE Hydro and Manchester Arena.

His show at Scarborough OAT in 2018 is presented by promoters Cuffe and Taylor. Director Peter Taylor said: “This is going to be a great night at this wonderful venue and will undoubtedly one of the highlights of the summer.

“Gary’s shows are always incredible events. His solo tours sell out very quickly so we expect demand for tickets to be massive and we would advise fans to get in early!”

Gary Barlow is a British singer-songwriter and record producer who found worldwide fame as a member of British pop group Take That. Since forming in 1989 Take That have won eight BRIT awards, sold over 45 million records and over eight million concert tickets.

Gary is one of Britain’s most successful songwriters, having written 14 Number One singles as well as being a six-time recipient of an Ivor Novello Award.  Aside from his achievements with Take That, he has also co-written and produced music for other renowned artists including Dame Shirley Bassey, Sir Elton John and Robbie Williams.

Gary’s last solo record ‘Since I Saw You Last’ sold more than 600,000 copies and was the ninth biggest selling album that year.  In more recent years, Gary has also turned his attention to the world of theatre, composing the score for the hugely successful production ‘Finding Neverland’, working alongside screenwriter Tim Firth to write the music and lyrics for musical ’The Girls’ and also working alongside his Take That band mates to produce ‘The Band’ a record breaking musical featuring the music of Take That.

Tickets for Gary Barlow’s show at Scarborough OAT go on sale at 9am Friday November 24th. They are available from www.ticketmaster.co.uk (0844 844 0444) and www.scarboroughopenairtheatre.com or in person from Scarborough Open Air Theatre Box Office (01723 818111) and the Discover Yorkshire Coast Tourism Bureau (01723 383636).