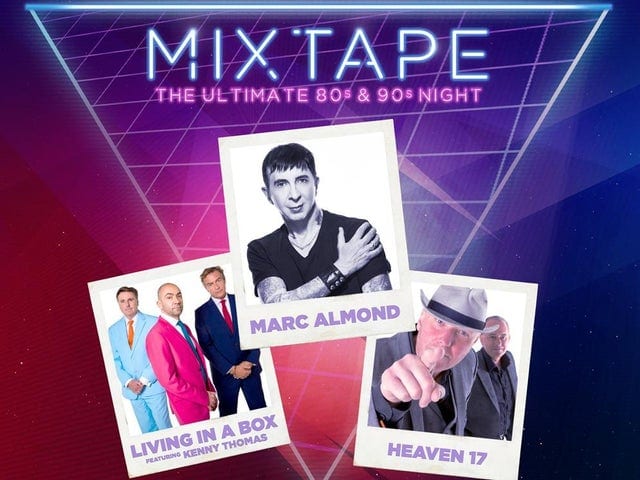 Get Ready for Mixtape – Scarborough OAT’s 80s night is back

Scarborough Open Air Theatre’s hugely popular 80s and 90s night is back for 2020 – headlined by some of Yorkshire’s biggest pop stars of the era.

Marc Almond, Heaven 17 and Living In A Box, featuring Kenny Thomas, will lead the Mixtape line-up on Friday July 10.

Tickets go on sale at 9am this Friday via www.scarboroughopenairtheatre.com

Peter Taylor, director of venue programmers Cuffe and Taylor, said: “We are delighted to announce Mixtape – the much-requested return of an 80s and 90s night to Scarborough Open Air Theatre.

“Previous shows have always been a big party night and, since the last 80s and 90s night here in 2017, we’ve been repeatedly asked for another one. We’ve listened, and Mixtape is here for summer 2020!

“Marc Almond, Heaven 17 and Living In A Box are not only three great artists with a string of major hits between them, but they all have such a strong local connection. We feel sure this will be another great night on the stunning Yorkshire coast.”

Internationally acclaimed artist Marc Almond has sold more than 30 million records worldwide and is an icon and influence to a generation of musicians.

Lancashire-born, but Yorkshire raised, it was as frontman of seminal 80s electronic duo Soft Cell that he first gained international acclaim with such massive hits as Tainted Love, Bedsitter, Torch, What and Say Hello Wave Goodbye before embarking on a diverse and hugely successful solo career.

Marc’s later work – including his 2017 album Shadows and Reflections and A Lovely Life To Live, his 2018 collaboration with Jools Holland – has been rapturously received by both fans and critics alike.

Marc will be joined at Scarborough by Heaven 17 who will be celebrating their 40th anniversary in 2020.

Born out of the split of the original Human League, the Sheffield new wave band – led by Glenn Gregory and Martyn Ware – shot to fame with synth-driven hits Temptation, Come Live With Me and Crushed by the Wheels of Industry together with such hugely acclaimed albums Penthouse and Pavement and The Luxury Gap.

Fellow Sheffield band Living In A Box exploded onto MTV in 1987 with a song named after themselves. Further Top 40 hits followed including Scales of Justice, So The Story Goes, Blow The House Down and Room In Your Heart.

They have now joined forces with double platinum-selling and double Brit Award nominee Kenny Thomas who burst into the UK charts in the early 1990s with Top 20 hits Outstanding, Thinking About Your Love and Best Of You.

A spectacular modern soul vocalist, Kenny has performed across the globe with the likes of Bobby Womack, Lisa Stansﬁeld, Shalamar and Alexander O’Neal. He has now taken over the lead vocals as a permanent member of Living In A Box.

Tickets for Mixtape go on general sale at 9am on Friday, November 22 via www.scarboroughopenairtheatre.com or in person from Scarborough Open Air Theatre Box Office (01723 818111) and the Discover Yorkshire Coast Tourism Bureau (01723 383636).