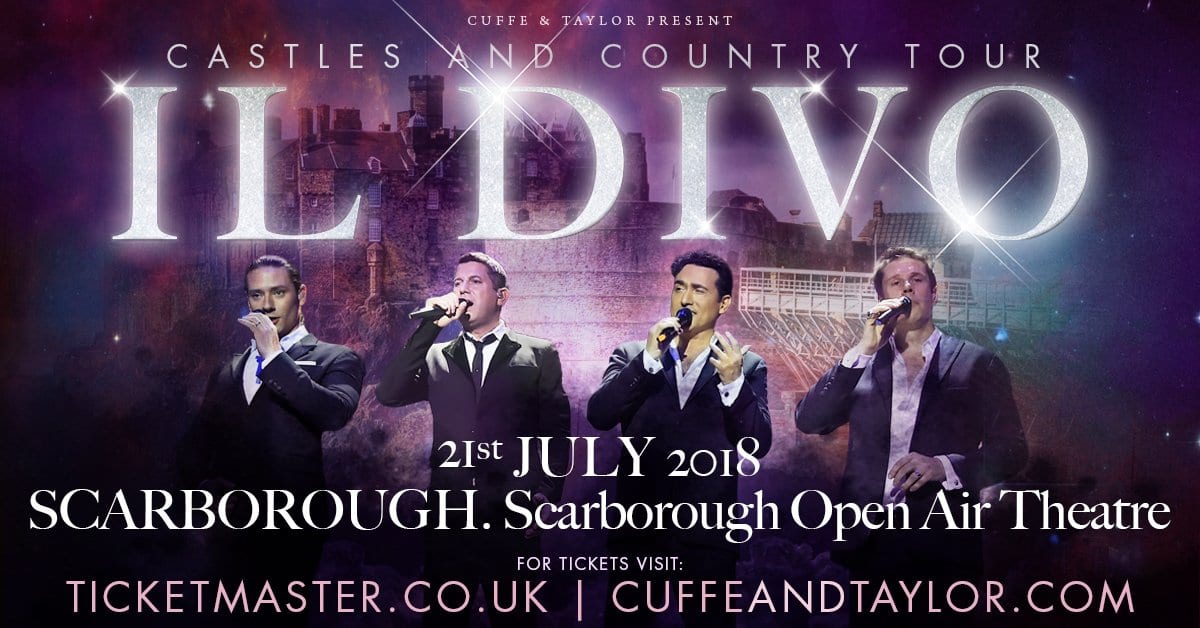 Il Divo, the world’s first and most successful classical-crossover group, are heading to the Yorkshire coast next summer for what promises to be a sensational night at Scarborough Open Air Theatre.

Tickets for the international quartet’s headline show on Saturday July 21st 2018 go on sale at 10am Saturday December 2nd via www.ticketmaster.co.uk

Il Divo’s show at Scarborough OAT – Europe’s largest open-air theatre – is among the group’s first UK dates since their 2016 Amor & Pasión World Tour which played to sell-out crowds at arenas around the globe.

The group’s show at Scarborough OAT in 2018 is presented by promoters Cuffe and Taylor. Director Peter Taylor said: “We are delighted to be bringing such a huge act to Scarborough Open Air Theatre. Il Divo are superstars who have millions of fans around the world. This promises to be an amazing night at this wonderful venue.”

Il Divo were heralded an international musical sensation after becoming the first classical crossover group in history to reach the top of the Billboard 200 (USA) list in 2005.

Their worldwide hits include Regresa a mi (Unbreak My Heart), The Time of Our Lives, Si voy a perderte (Don’t wanna lose you) and I Believe in You (Je crois en toi).

In 2006, the Guinness World Records listed Il Divo as the most commercially successful, classical-crossover group in international music history. They were named “Artist of the Decade” at the 2011 Classic Brit Awards.

Il Divo have shared microphones with fellow superstars from Barbara Streisand to Celine Dion, and their sell-out concerts have been attended by Hollywood greats including Tom Hanks and Robert De Niro.

Tickets for Il Divo’s show at Scarborough OAT go on sale at 10am Saturday December 2nd. They are available from www.ticketmaster.co.uk (0844 844 0444) and www.scarboroughopenairtheatre.com or in person from Scarborough Open Air Theatre Box Office (01723 818111) and the Discover Yorkshire Coast Tourism Bureau (01723 383636).