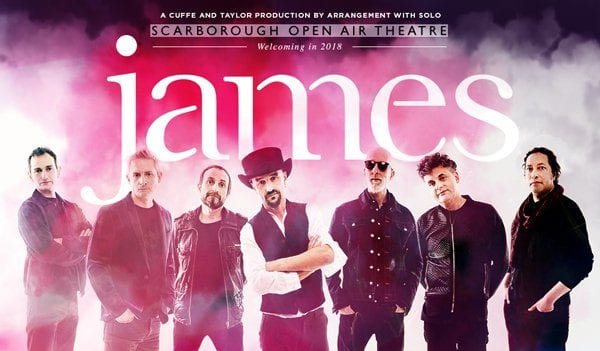 The band behind such anthems as Sit Down, Born of Frustration, She’s A Star and Come Home bring their sensational live show to Europe’s largest open-air theatre on Saturday August 18.

Tickets go on sale at 9am Friday March 30 via www.scarboroughopenairtheatre.com

James – who have sold more than 25 million records worldwide – have released 14 studio albums over the past 30 years which have gained both critical and commercial acclaim.

James’s enduring creativity and musical legacy has made them one of the most influential British indie bands of the last four decades. After signing to Factory Records in 1982, they went on to release a series of massive hit singles and have built a huge, loyal and fanatical fanbase.

The band embark on a UK tour in May – visiting many intimate indoor venues – before a series of major festival appearances and huge outdoor dates, including the not-to-be-missed return to Scarborough OAT where they headlined in 2015. This was in the days when a water-filled moat stood between the stage and the audience.

James’s Yorkshire-born lead singer Tim Booth said: “We’re looking forward to playing this lovely venue and very happy that there is no longer a moat to cross. My walking on the water training wasn’t going so well!”

The band’s Scarborough OAT show is presented by Cuffe and Taylor. Director Peter Taylor said: “James are rightly regarded as one of the most important and influential pioneers of the Manchester music scene since the 1980s.

“We have had so many people ask for us to bring them back to Scarborough OAT so we are delighted we have been able to add them to what is undoubtedly the biggest and best line up ever seen at Scarborough OAT.”