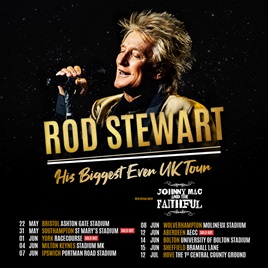 Celtic-folk and Americana band Johnny Mac and the Faithful will be the special guest act before Rod Stewart performs on his outdoor UK tour this summer.

The Glasgow-based band have been invited to perform at all 10 stadium shows for the Rod Stewart Live in Concert tour in May, June and July after attracting the attention of Rod.

Johnny Mac and the Faithful previously opened for Rod at Glasgow’s SSE Hydro in 2017 at a concert celebrating the 50th anniversary of Celtic Football Club’s 1967 European Cup victory. A friendship was born from that and Rod invited frontman John McLaughlin to co-write the song Julia which appears on his latest number one album Blood Red Roses.

And this summer Johnny Mac and the Faithful will be the special guest act at the following shows:

Johnny Mac and the Faithful are a band of lifelong friends who can kickstart any party with their jamboree of celtic-folk and Americana.

Made up of John McLaughlin (lead vocalist), Gordy Goudie (lead guitar), Ryan Hassan (drums), Tam McKinley (bass), Gary McDowell (guitar), Terry Dourish (keys and accordion) and Lisa Petticrew (fiddle), the band are a tombola of musicians with Scottish and Irish roots. Like a raggle-taggle hoard of troubadours they roll from gig to gig, playing their own brand of uplifting, joyful 3-chord wonders, covering Irish folk classics such as Ewan MacColl’s Dirty Old Town and Steve Earle’s Galway Girl as well as a string of original songs including new single Took a train and You make my Monday morning feel like Saturday night.

Frontman John McLaughlin is an award-winning songwriter and producer who has penned hits for artists such as Westlife, Busted, Echo & The Bunnymen, Shane MacGowan and Sandi Thom.

John said: “Individually we have been blessed to have played and worked with some of greatest and infamous stars of our time from the Pogues iconic frontman Shane MacGowan, to the enigmatic Echo and the Bunnymen, Glasgow’s own sons the Simple Minds and Ireland’s finest stompers The Dubliners.

“Our proudest moment to date though, as a band, has to be supporting global rock icon Sir Rod Stewart at Glasgow’s SSE Hydro in 2017.  It was for Celtic Football Club’s concert to honour the 50th anniversary of their 1967 European Cup winning team The Lisbon Lions.”

Rod watched their performance at the Hydro show and realised they were the same band he’d heard blaring through the tannoy at Celtic on match days.

John added: “We couldn’t believe it… Rod Stewart the world-famous rock legend was digging our wee Celtic rock band… that was mind blowing!

“A few months after the Hydro gig Rod contacted me about doing a co-write for a song. Firstly, as a lifelong fan I was ecstatic. Me and my writing partner Dave Thomas had started a tune and Rod loved the melody and in a flash of inspiration Rod had written the lyrics for Julia which he then included on his no1 Album Blood Red Roses.

“As a songwriter I couldn’t have been prouder to have my name alongside Rod’s on his record, it truly was a dream come true. To get to work with your Rock’n’Roll hero…Wow, that really doesn’t happen so much, and then to discover what an absolute diamond of a guy he was that was a lovely bonus.

“Now we just can’t wait to get up on stage. To be on tour with Rod and play our music to hundreds of thousands of his fans makes us feel very proud, blessed and thankful.”