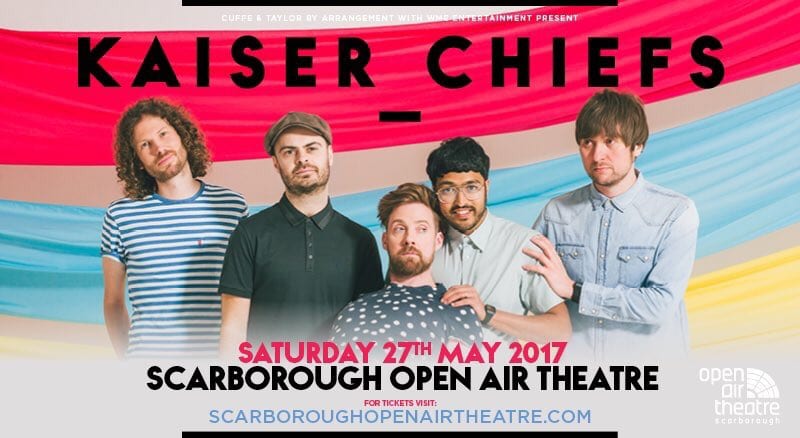 Yorkshire’s favourite sons KAISER CHIEFS are heading home for what promises to be an amazing night at Scarborough Open Air Theatre.

Tickets for what promises to be one of the gigs of the year go on sale this Friday, February 10, at 9am.

Kaiser Chiefs frontman Ricky Wilson said: “As everyone knows we are proud Yorkshire lads and so we can’t wait to head to the beautiful Scarborough seaside for what we know is going to be an amazing gig.

“There is something truly special about playing in front of a Yorkshire audience. We know the crowd and the setting of the Open Air Theatre will make for a brilliant atmosphere and a real night to remember.”

Since bursting into the nation’s psyche in 2004, the Leeds-based band have scored two Number One albums and a string of hits including the sing-along anthems
I Predict a Riot, Oh My God and UK Number One single Ruby.

“They have an amazing back catalogue with some of the biggest sing-a-long anthems of the last 20 years. Added to that, they returned last year with a great album which has introduced them to a new generation of fans.

“We cannot wait to see 8,000 fans singing along at Scarborough OAT. It’s going to be a fantastic night.”