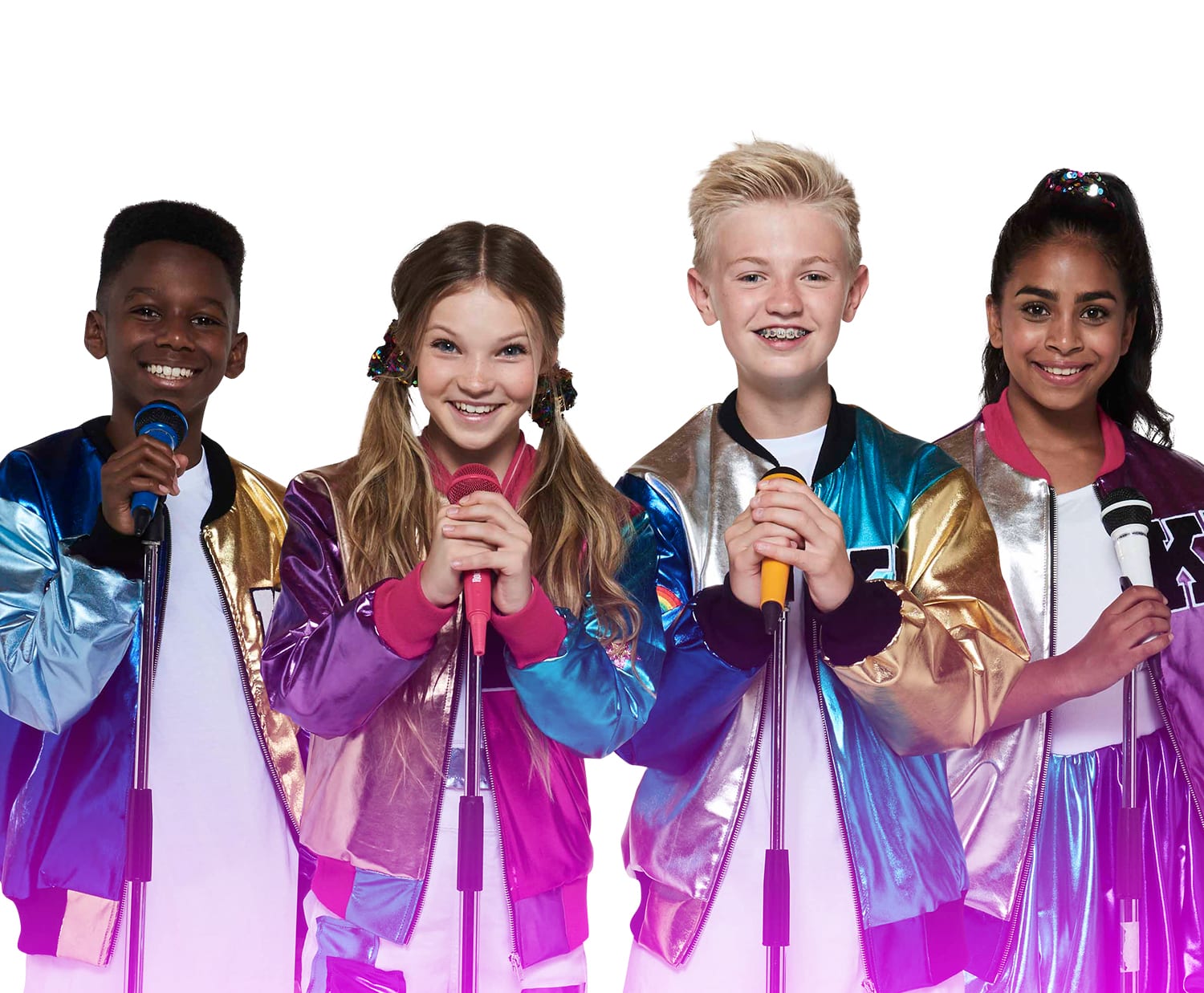 KIDZ BOP the #1 music brand for kids, is bringing the KIDZ BOP World Tour to the UK for eight live concert dates in April 2020.

This marks the first-ever headlining tour for The British KIDZ BOP kids, who have sold more than 275,000 albums to date.

The tour, which features today’s biggest hits “sung by kids for kids”, will visit iconic venues across the UK during the Easter holidays, opening at the world-famous The London Palladium on Tuesday, April 7. It follows the release of KIDZ BOP’s fifth UK album, KIDZ BOP 2020.

The tour will see the KIDZ BOP Kids perform some of today’s biggest global pop hits live on stage. The all-new show features awesome set design, costumes, exciting choreography, and tonnes of cool surprises! Dads even have the chance to show off their best dance moves on stage during the “Daddy Dance Off.”

How long have you been in KIDZ BOP?

MAX (15): Just over three years now for me. I wouldn’t say I’m a veteran, but I am part of the original UK team, and we’ve added a few new people along the way.I’ve seen it grow and it has been so much fun doing all the shows.

I’d seen the American KIDZ BOP Kids and watched their videos loads before I auditioned – and seeing them doing all that and their live shows, I was so excited to be chosen for the UK team.

MIA (14): I’ve been in KIDZ BOP just over a year. It was a bit of a different start for me, as I was filmed during the audition process for a TV show. I was at school with Ashton and Twinkle, so I knew a bit of what KIDZ BOP was all about when I started the audition process which was massive with being on TV too. There were a lot of stages, and the very last one I was performing with the KIDZ BOP Kids, and when we finished, I was told I’d been chosen.

TWINKLE (13): I was 10 when I started, so it’s been over three years now, it’s gone so quickly. I did the same as Max and Ashton, going through a whole big audition process at the very start of it all; lots of rounds of dancing and singing, and I eventually got in. I was at the Sylvia Young Stage School for about a year before auditioning.

ASHTON (14): It’s been about three years since I signed up with KIDZ BOP, and it’s been incredible seeing how much we have grown from just making music videos here in the UK through to travelling to New York last year [2019] to film there on location, and then looking forward to 2020 and having our own tour in the UK.

What’s your favourite thing about being a KIDZ BOP Kid?

MAX: I love performing, I love being on stage – so the tour will be amazing; singing some of my favourite songs with some of my best friends. It’s amazing to think we now have a tour which will be all about us, the UK kids, after having done a big live show alongside the American kids last year.

MIA: It’s like all my dreams come true to be in KIDZ BOP; I get to rehearse songs, travel the world with my best friends, it’s all amazing. Honestly, I do love everything about it, but probably at the moment, I’m super excited for the tour and starting rehearsals to learn the new dances. I love all the clothes we get to wear too. We have a stylist called Gemma, who brings all the outfits to out shoots, I always look forward to seeing what she’s got for us.

TWINKLE: For me, it’s actually the rehearsals for our live shows and performances – which is a bit different to the others. It’s the time when we get to experiment with new dance moves and our vocals, and we learn so much during the rehearsal sessions. The process of creating the show is hard work but so much fun, and then we get to go out there, perform and see all the reactions from the audience; I love watching out for that too.

ASHTON: I really enjoy the production side of it, making the songs and learning about that technical process. Then, of course, we take it out to the live shows and performances and it’s amazing to see people singing the tracks back to you.

KIDZ BOP is massive in America where it first launched – and it’s growing more and more popular here in the UK now too. What’s the difference between the UK and US KIDZ BOP Kids?

MAX: We usually sing UK chart songs, and the US kids will sing the songs from their charts. But then there are some huge hits, which are big tracks on both sides of the Atlantic and we come together for those. Last year [2019], we went to New York to film with the US kids – and did Lizzo’s Truth Hurts where we appear in the US kids’ video, and we did Jess Glynne’s One Touch with them in our video. In November 2018, we had our first trip to America with KIDZ BOP, recording One Kiss (Calvin Harris and Dua Lipa) in the studio, but the trip last year was the first time we got out and about filming videos as well as recording in the studio.

ASHTON: Probably my favourite song of all the ones we’ve done so far is Beautiful People (Ed Sheeran), which we filmed on that trip – the video is awesome. We were filming on a beach in front of Coney Island… What’s not to love about that?

Do you enjoy making new friends and all the experiences which KIDZ BOP has brought you?

MAX: It’s been brilliant to meet everyone through this experience and we’ve all become such good friends. We all share the same passion and come together to sing and dance. Then there’s meeting the fans too, and we’re so lucky to have them… It’s like we’re all one big global KIDZ BOP family.

TWINKLE: It was amazing working with the US kids, with different people and on different songs. The trips we get to go on to film abroad are great fun. We’ve been to Germany to film with the German KIDZ BOP kids too, joining in with their videos – so we get to learn songs in other languages too. We might not have spoken the same languages but, like Max said, we share the love of singing and dancing and that’s what brings people together wherever they come from.

ASHTON: The whole experience is a dream come true for each of us. We’d never have imagined a few years ago that we would have achieved all of this; none of us had done anything like it before and we just didn’t realise how many opportunities it would bring us; traveling, meeting so many people, touring the UK. It’s just WOW.

Obviously, life as a KIDZ BOP Kid is limited – you’re only a kid for so long! So what would you like to do in the future?

MAX: Hopefully I’ve still got a little while as a KIDZ BOP kid, especially as I’m still loving it. I would definitely like to stay in music – writing and producing my own songs. I play guitar and a bit of piano, and I have a bit of software on my computer at home.

MIA: I would love to stay doing this forever if I could! But I’d also maybe like to try acting on TV. I had done some bits and pieces of acting before KIDZ BOP and TV adverts, but one of the things which has been really amazing about being in KIDZ BOP is getting to experience lots of different areas of the industry – music, TV, producing, performing. I’ve just learnt so much and it’s really opened my eyes to different things.

TWINKLE: Yes, I’d like to stay in the industry too, making more music and also doing more acting, probably in TV.

ASHTON: Before KIDZ BOP, I just wanted to be an actor, but this has really opened my eyes to so many different things and different opportunities in the music and entertainment business. I would love to work in music, but there are lots of things I want to know more about now too.

What are you looking forward to most with the tour?

MAX: For me, the Palladium dates will be the big ones as I’ve got my family and friends coming along, and it’ll be so good to see them all there in the audience. I’m especially looking forward to performing Uptown Funk, that’s my absolute favourite track at the moment because it gets such a great reaction when we perform it, whether it’s been live or on TV.

MIA: The first songs I did with KIDZ BOP were Rise and One Kiss, so they’re always special for me and I’m looking forward to doing them on the tour. Although, like Max – I also love Uptown Funk, it’s such a great track. And the Manchester show will be extra special for me, as I come from Lancashire so lots of my family and friends are coming. Every time I speak to them, they’re telling me more people have booked to come and see me there.

ASHTON: I’m excited to perform in Birmingham, because although I live in London I have a lot of family from there who don’t always get to see what KIDZ BOP is all about for me. And of course, who doesn’t want to say they have performed at The London Palladium? That’s going to be special as London is home. But I can honestly say, I really want to see the reactions from everyone right across the country – that’s going to be incredible.
When we did the KIDZ BOP World Tour headline show in London last year, with the US KIDZ BOP Kids, that was great – it was the first time people in the UK had had the chance to come out specially to see KIDZ BOP in a live performance, we’d always been part of other shows… And now, here we are preparing for our very own KIDZ BOP UK tour. We can’t wait.