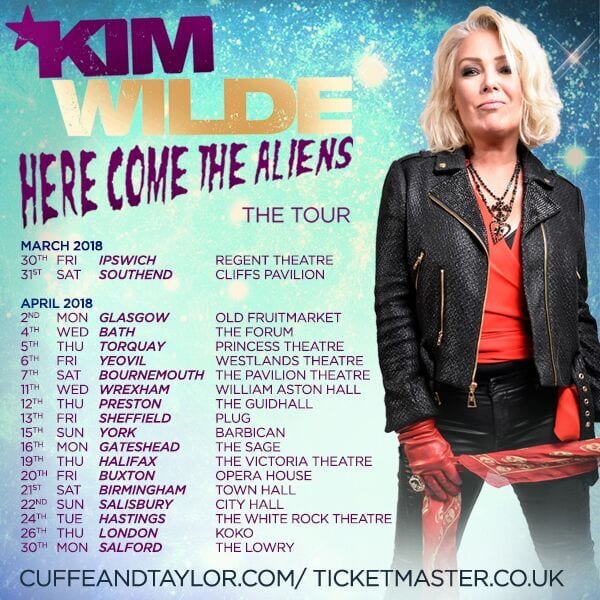 Pop icon Kim Wilde is heading out on a brand new 19-date UK tour in spring 2018.

The multi-award-winning artist – who has sold more than 30 million records worldwide – is currently completing work on her 14th studio album Here Come The Aliens.

And today, Kim is delighted to announce she will take to the road across England, Scotland and Wales in March and April with her HERE COME THE ALIENS TOUR 2018 – her first full UK tour since 1982.

Tickets go on general sale at 9am Friday October 27th from www.ticketmaster.com

Kim said: “I’m really excited to be announcing a new tour. I don’t think I’ve toured the UK for over 30 years so I can’t wait to play this brand new show with my fantastic band.

“We are going to be playing my biggest hits and some fabulous tracks from the new album which is coming out next spring. We can’t wait.”

Kim has recorded her new album at London’s legendary RAK studios – the very same studios where she began her career back in 1981 and recorded such seminal hits as Kids In America, Chequered Love and Cambodia.

The Here Come The Aliens Tour is presented by promoters Cuffe and Taylor.

Director Peter Taylor said: “Kim Wilde is one of the most successful female pop stars the UK has ever produced. She has sold more than 30 million records and has been a trail-blazer for many of the British female artists who followed her success.

“Kim has played to sell-out crowds across Europe and the world and we expect this tour to be massively popular with her army of fans across the UK and beyond. It is going to be something really special.”