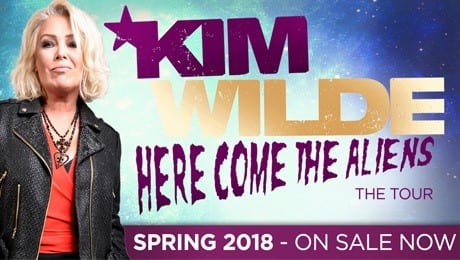 Fans of pop icon Kim Wilde are being invited to take up a special exclusive offer to secure her sensational new album along with tickets to her first UK tour in 35 years.

Kim’s new album Here Come The Aliens – which includes the massive radio hit Pop Don’t Stop – has won rave reviews since it landed last Friday. It is already on track to become her biggest chart smash since her 1988 album Close.

The multi-award-winning artist – who has sold more than 30 million records worldwide – will hit the road on her 19-date UK Tour in late March and throughout April, starting at Ipswich Regent Theatre on March 30th.

And fans can now bag both Kim’s new album and a ticket to one of her UK shows for the special price of just £23!

To take advantage of this amazing offer go www.ticketmaster.co.uk – but be warned, numbers are limited so be quick!

Kim said: “The response to the new album has been really fantastic. It’s been getting fabulous reviews and the reaction from everyone has been brilliant.

“We cannot wait to get out on tour and play the new songs alongside my biggest hits. I am so excited and am really looking forward to seeing familiar faces in the crowd along with hopefully lots of new fans.”

Tickets for all dates are on sale via www.ticketmaster.co.uk