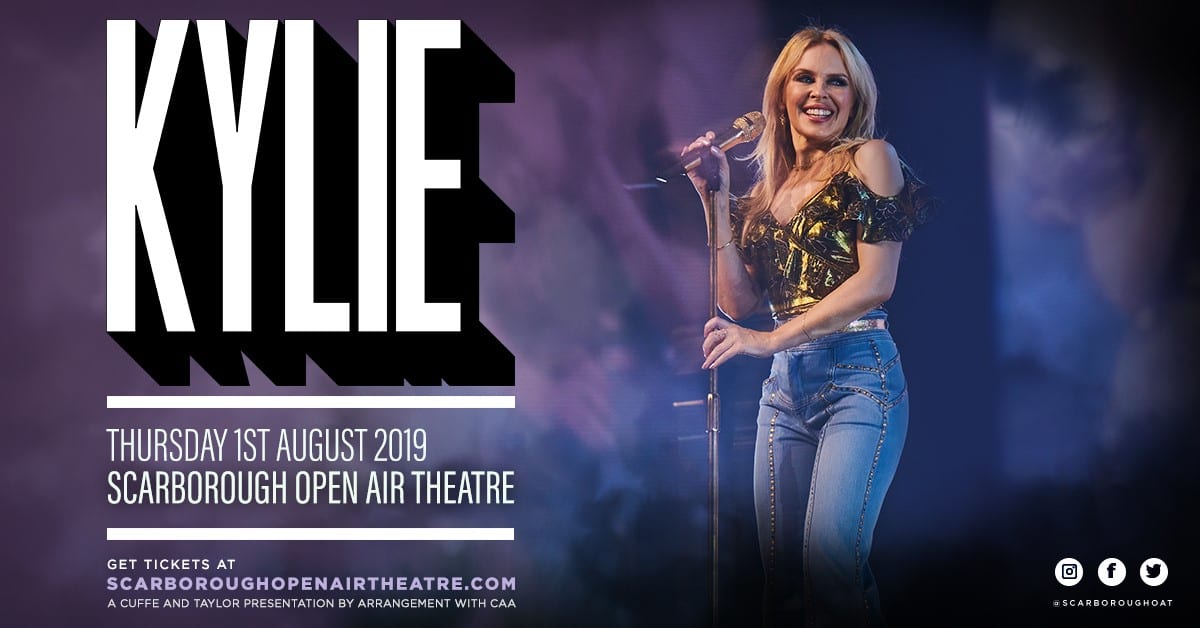 International pop star Kylie Minogue today announces a series of special shows for summer 2019 – including a headline date on the Yorkshire coast.

Tickets go on sale at 9am on Friday November 16 at www.scarboroughopenairtheatre.com

Kylie’s recent shows as part of her ‘Golden’ UK arena tour have been met with widespread critical acclaim. Metro remarked ‘Quite frankly, she was breath-taking’ and that her show “proves why Kylie remains pop’s Golden girl” in their 5-star review of the opening night of the tour, with Evening Standard praising it as “a welcome reminder of Minogue’s generosity as a performer”.

Next summer’s shows will see Kylie performing a series of career-spanning hits from her unparalleled back catalogue.

Her latest album ‘Golden’ was released earlier this year via BMG Records. It debuted at Number 1 in the UK Albums Chart and is her sixth Number 1 album to date. It spawned the singles ‘Stop Me From Falling’ and ‘Dancing’, the official video for which has over 11 million views and counting. It has spent twenty weeks on the UK album charts and is the best-selling 2018 release by an international female artist.

Kylie is the first headliner to be revealed at Scarborough Open Air Theatre for 2019 following a record breaking year at the venue which attracted more than 90,000 music fans to the Yorkshire coast.

Venue programmer Peter Taylor, director of promoters Cuffe and Taylor, said: “Kylie is an icon, a true pop legend, and we are delighted to be able to announce her as our first headline artist for 2019.

“She has recorded some of the biggest pop hits in the last 30 years and her show here is quite simply a gig fans will not want to miss.

“We set the bar high in 2018, bringing many world-class acts here to the Yorkshire coast and, in Kylie Minogue, we have pulled off another coup.

“This is without question going to be one of the must-see gigs of 2019 and we cannot wait to welcome Kylie to Scarborough OAT.”

You can access an exclusive venue pre-sale 24 hours before general sale by signing up to the mailing list at www.scarboroughopenairtheatre.com before 5pm on Wednesday November 14, or by downloading the Scarborough Open Air Theatre mobile app.