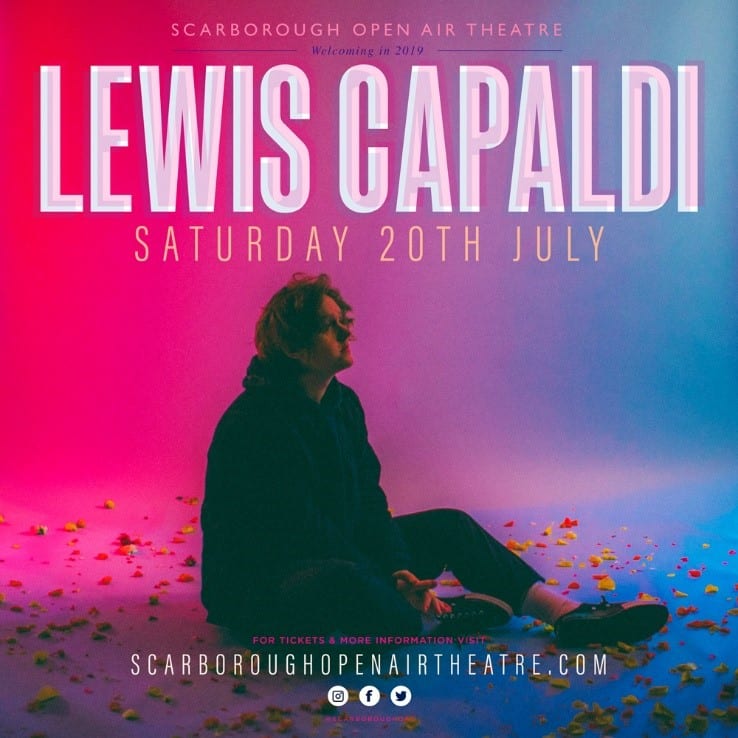 Chart topper Lewis Capaldi – one of the most critically acclaimed artists of his generation – is bringing his unmissable live show to Scarborough Open Air Theatre this summer.

The 22-year-old singer songwriter has just scored his first UK Number One single with the sensational ‘Someone You Loved’ and will now play the UK’s largest open air arena on Saturday July 20.

Tickets go on sale on Friday at 9am via www.scarboroughopenairtheatre.com

Lewis’ eagerly awaited debut album ‘Divinely Uninspired To A Hellish’ Extent will be released on May 17.

Since bursting onto the scene in 2017, with his debut release ‘Bruises’, Lewis has sold out no fewer than three back-to-back headline tours.

The young Scotsman has achieved successive Radio 1 A-List tracks, amassed more than 330 million plays across streaming services and was shortlisted for the 2019 Brits Critics’ Choice award.

As well as selling more than 90,000 tickets for his own headline shows, Lewis has also joined such musical peers as Sam Smith, Rag’n’ Bone Man, Bastille and Niall Horan on tour, playing to audiences in excess of 500,000.

His Scarborough Open Air Theatre gig is presented by Cuffe and Taylor. Director Peter Taylor said: “Lewis Capaldi is fast becoming one of the most critically acclaimed singer-songwriters of his generation and we are delighted he is coming to Scarborough OAT this summer.

“He has just scored his first UK Number 1 single, with the sensational ‘Someone You Loved’, and is one of the UK’s most sought after live performers with a string of sell out concerts throughout 2018 and again in 2019.

“Lewis’ debut album is going to be one of the records of the year and so we cannot wait to welcome him here. I am sure music fans will be beating a path to the Yorkshire coast in their droves for what promises to be an unmissable show.”

Including hit UK singles ‘Grace’, Bruises’ and ‘Someone You Loved’, Lewis’ stunningly identifiable voice, coupled with its turbulent themes of love, loss and heartache, make it a debut record that is unequivocally relatable.

His debut album ‘Divinely Uninspired To A Hellish Extent’ is available on 12” LP, CD and CD Box Set (with exclusive sunglasses & Lewis Capaldi calendar (available via Lewis’ store only) https://lewiscapaldi.lnk.to/OfficialStorePR