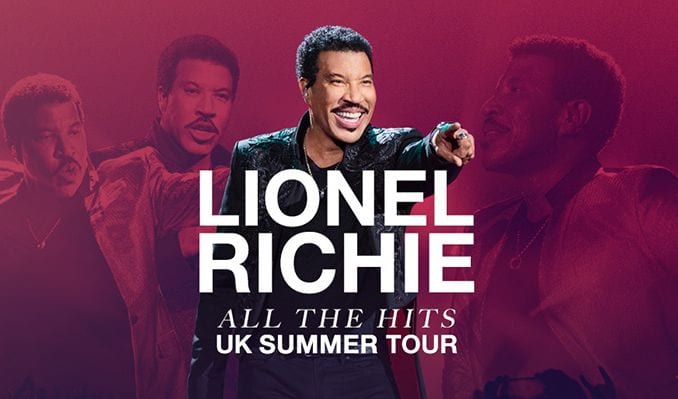 International superstar Lionel Richie will return to the UK in 2018 with a show at Scarborough Open Air Theatre.

This not-to-be-missed Yorkshire coast date on Tuesday June 19 is part of the music icon’s summer tour which will visit stunning open-air venues across the country.

Tickets go on sale at 10am on Friday February 2 via www.ticketmaster.co.uk

Performing hits from his extensive and much-loved repertoire spanning decades, all the way from the Commodores to the present day, Lionel’s shows are world renowned for their party atmosphere.

Fans will be able to enjoy timeless mega-hits and sing along to classics such as ‘Lady’, ‘Truly, ‘Dancing on the Ceiling’, ‘Say You Say Me’, ‘Hello’ and ‘All Night Long’.

Lionel says of his return: “I’ve been missing the UK and can’t wait to make my long-awaited return and to see parts of the country I’ve never made it out to before. The fans are always incredible and they make the atmosphere at every show electric, so I look forward to singing along with them soon.”

These will be Lionel’s first UK shows since receiving glittering reviews for his ‘All The Hits’ tour which included three nights at London’s The O2. The dates followed a phenomenal Glastonbury 2016 performance which drew the biggest crowd of the weekend as more than 200,000 people flocked to the Pyramid Stage. Lionel’s incredible success continued as his album ‘The Definitive Collection’ topped the charts and provided his first UK Number 1 in 23 years.

In 2016 Lionel launched his on-going Las Vegas headline residency show, ‘Lionel Richie—All the Hits’, at The AXIS at Planet Hollywood Resort & Casino, where he takes his fans on a spectacular musical journey, performing a variety of his seminal hits. Having sold more than 100 million albums worldwide he recently joined the judging panel on ABC’s American Idol.

Tickets go on sale at 10am Friday from www.ticketmaster.co.uk and www.scarboroughopenairtheatre.com or in person from Scarborough Open Air Theatre Box Office (01723 818111) and the Discover Yorkshire Coast Tourism Bureau (01723 383636).