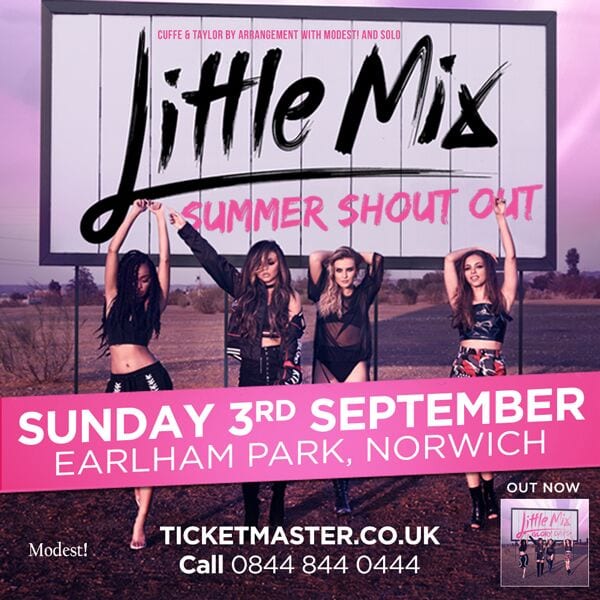 The world’s biggest girl band LITTLE MIX are heading to Norwich’s Earlham Park in 2017 as part of their ‘Summer Shout Out.’

Since 2011, Perrie Edwards, Jesy Nelson, Leigh-Anne Pinnock and Jade Thirlwall have established themselves as one of British pop’s brightest acts.

And Little Mix bring their sensational stage show – featuring such signature hits as Shout Out to My Ex, Black Magic, Hair and Wings, alongside tracks from their new album Glory Days – to Earlham Park on Sunday September 3.

Tickets go on sale at 10am Saturday March 25 priced from £39.50 and are available from www.ticketmaster.co.uk

There will also be exclusive Golden Circle tickets available at £55.

The Norwich date marks an extension to the band’s 15-date ‘Summer Shout Out’ tour. They will play venues across the UK earlier in the summer before heading down under to Australia and New Zealand and then returning for the Earlham Park gig in September.

The gig is being organised by promoters Cuffe and Taylor.

Director Peter Taylor said: “We are delighted to be bringing Little Mix to Earlham Park as this is a hugely exciting announcement for Norwich and the surrounding area.

“Little Mix are, without a doubt, one of the UK’s most successful pop acts and the response to their tour this year has been absolutely phenomenal.

“Earlham Park is a venue that is synonymous with fantastic outdoor concerts so we will look forward  to what is sure to be an incredible night of live music.”

Pop acts like Little Mix don’t come along that often. Growing better and bolder with each new album, they understand the brilliance of pop music and how it relates to their passionate and loyal fan base.

2016 was an incredible year for the band with another massive No.1 single ‘Shout Out To My Ex’, and their album ‘Glory Days’, shooting straight to No.1 on the Official Albums Chart. The record has spent a total of four weeks in the peak position and is the quickest selling album in the UK charts by a girl group since Destiny’s Child’s Survivor in 2001. It is also the longest-reigning girl group No.1 album of the millennium.

Tickets to see Little Mix at Earlham Park on Sunday September 3 are priced from £39.50 and are available from www.ticketmaster.co.uk