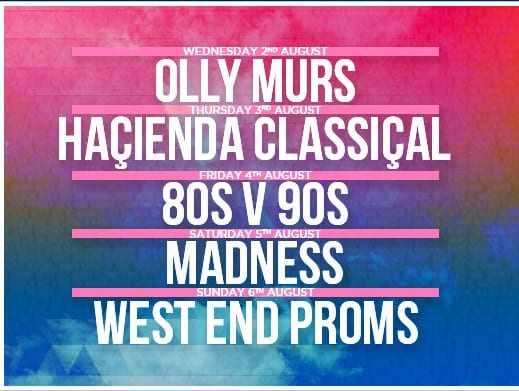 Lytham Festival organisers are today announcing the full list of headliners for the Main Proms Arena on Lytham Green from Wednesday 2 to Sunday 6 August.

Tickets for Lytham Festival 2017 are on sale now from www.lythamfestival.com

An extra night of live music is being added to the bill on Wednesday August 2 when pop star Olly Murs will kick off the headlining nights in the Main Proms Arena. Since Olly shot to fame in 2009, he has recorded four multi-platinum albums and produced four Number 1 singles with total record sales exceeding 10 million.

Saturday night will see Ska legends Madness headline. The Camden stars have maintained a huge and loyal following since the 1970s and most recently released their 12th studio album Can’t Touch Us Now.

Lytham Festival director Peter Taylor said: “This is a fantastic line-up for Lytham Festival 2017 and one, which we feel, will appeal across generations.

“Every headline act is a huge star nationally and internationally and we are confident this is going to be one heck of a week of live music.”

West End Proms is returning to Lytham Festival 2017 after high winds caused the cancellation of the sell-out show at the 2016 festival.

Peter added: “We were devastated when the weather caused us to cancel West End Proms for 2016 and we were inundated with people who had attended asking us to reschedule for 2017, so that is exactly what we have done.

“Once again I can promise this, along with all our other nights at Lytham Festival, really is going to be a spectacular show and I personally cannot wait to see all these stars back in Lytham.

“It is also testament to the success of Lytham Festival that everyone involved in 2016’s West End Proms wants to return for 2017.”

Limited weekend tickets, The Pass, are also available covering all performances in the main Lytham Green arena from Weds 2– Sun 6 August priced at £175.

VIP tickets and hospitality are available at all events in the main Lytham Green arena.