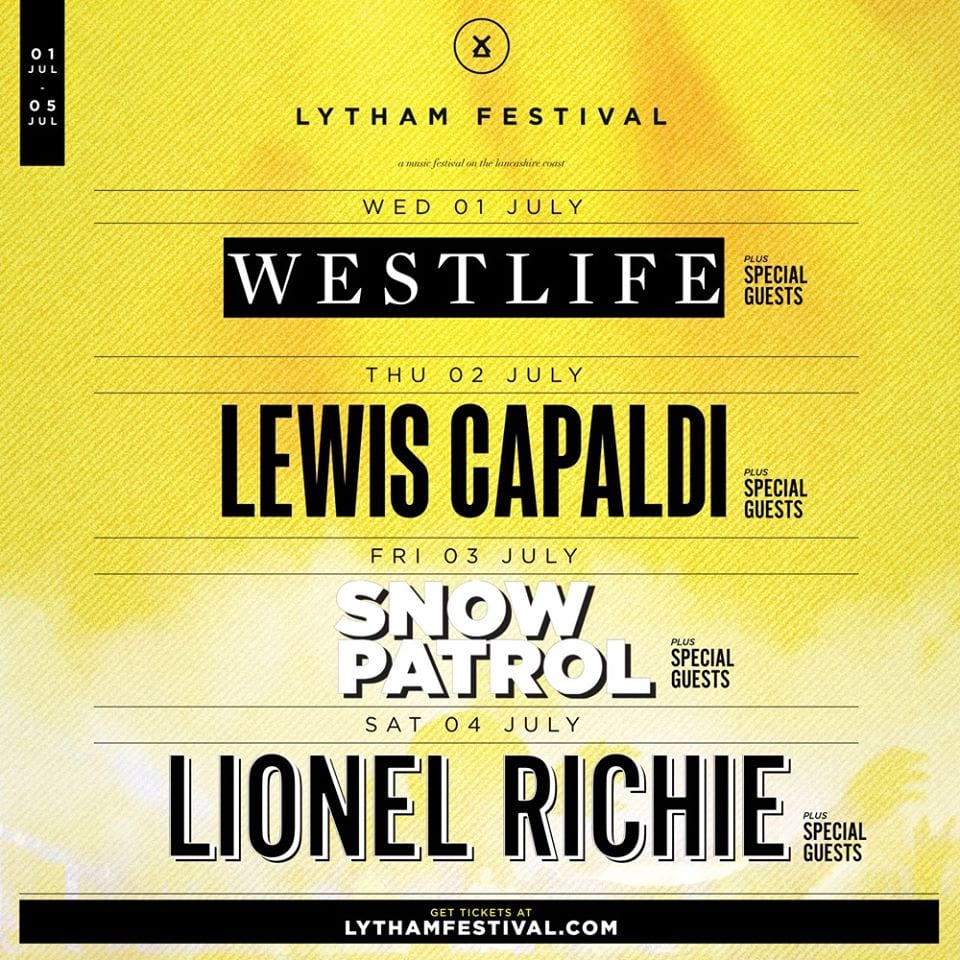 This stellar line-up is today announced as Lancashire’s biggest music festival prepares for another sell-out year.

The 11th annual Lytham Festival will take place on Lytham Green from Wednesday 01 to Sunday 05 July.

And as four of the five headliners are revealed, five-day passes giving festival-goers access to all nights on Lytham Green are on sale now from www.lythamfestival.com

Individual tickets to each night will go on sale at 8am Thursday November 28.

Opening Lytham Festival 2020 on Wednesday July 1 will be a headlining show from Irish pop superstars Westlife as part of their UK wide Stadiums in the Summer Tour. Hailed as the UK’s top selling album group of the 21st Century, the Lytham Festival show will see the global pop kings perform all of their greatest hits including Swear It Again, Flying Without Wings and You Raise Me Up as well as sensational up-tempo new songs from their forthcoming new album Spectrum.

Thursday July 2 will see rapidly rising international star Lewis Capaldi headline the Main Proms Arena. It’s been a meteoric rise to success for the Scottish singer-songwriter who is currently enjoying huge adoration on both sides of the Atlantic and has just been nominated for a Grammy Award for his hit Someone You Loved.

Indie rockers Snow Patrol are the Friday night headliners. With a 25-year career they have racked up an impressive number of accolades including more than 17 million global album sales and an Ivor Novello award. Their 2006 monster hit single Chasing Cars went on to become UK radio’s most played song of the 21st Century.

Saturday night will see international superstar Lionel Richie headline as he will perform hits from his extensive and much-loved repertoire spanning decades, all the way from the Commodores to the present day. His music is part of the fabric of pop music and Richie has sold more than 100 million albums worldwide and is an Oscar, Golden Globe, and four-time Grammy Awards winner.

Lytham Festival will close on Sunday July 5 with the headlining artist being announced at 8am tomorrow.

Details of all support artists will be revealed soon.

Festival director Peter Taylor is delighted with the line-up.

“2020 is shaping to be yet another massive year for Lytham Festival,” said Peter.

“We had an incredible line-up for 2019 as we celebrated our 10-year anniversary so our mission was to make 2020 even bigger and better, and we believe the festival we have planned will do just that.

“To have Lionel Richie and Westlife on the same bill as Lewis Capaldi and Snow Patrol is incredibly exciting and really does make this our biggest ever line-up.

“There will be tens of thousands of people descending on Lytham for the five days of the festival and we can’t wait to welcome them for what will be five truly spectacular nights of live music.”

Five day Passes for Lytham Festival are on sale now priced from £199 and are available from www.lythamfestival.com

Individual tickets priced from £35 will go on sale at 8am Thursday November 28.

As Lytham Festival enters a new decade, it has already announced a brand-new Lytham Proms concert for 2020.

The traditional picnic proms, which was ordinarily held as part of Lytham Festival, will now take place at historic Lytham Hall on Saturday August 29 with all money raised being gifted to the continued restoration of the Grade 1 Georgian mansion.