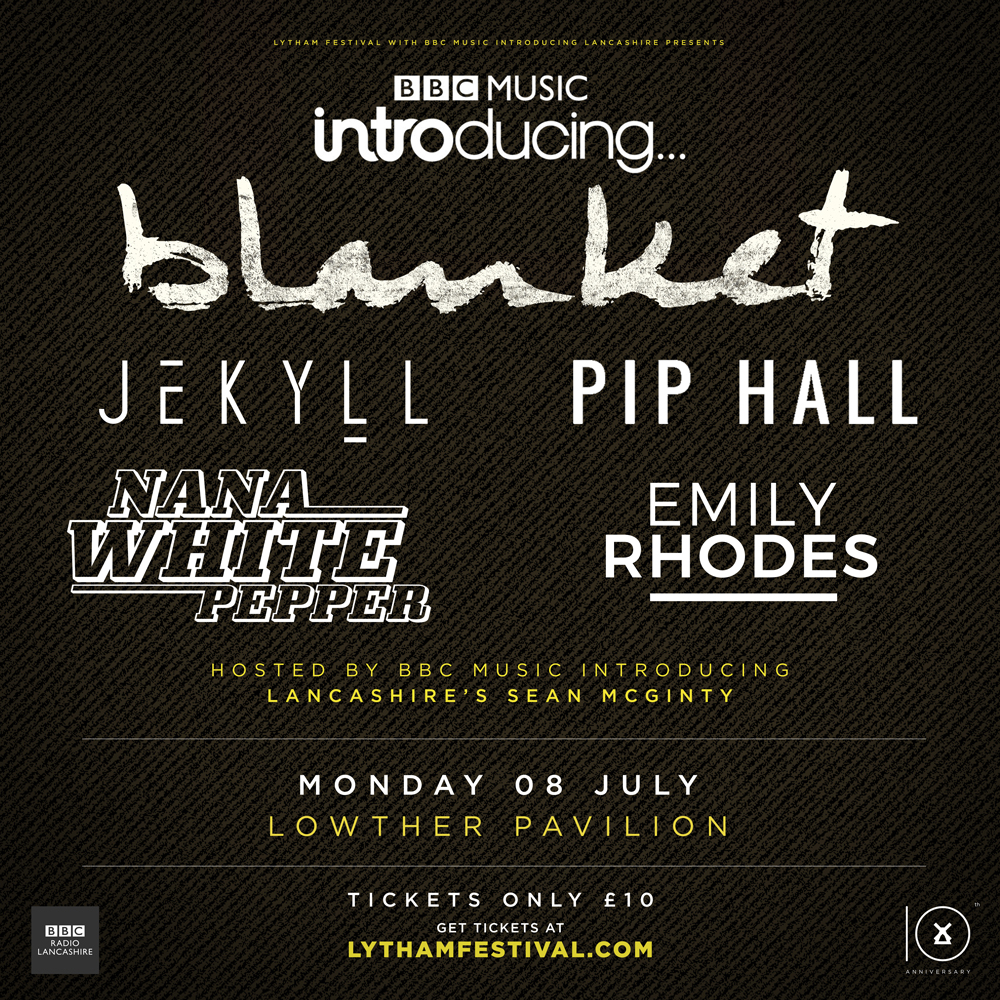 Some of Lancashire’s hottest up-and-coming music talent will come together to launch this year’s Lytham Festival with a special BBC Music Introducing event.

Before the action kicks-off in the main arena on Lytham Green, the Festival – in association with BBC Music Introducing Lancashire – is hosting a night dedicated to emerging local talent.

Blanket, Jekyll, Pip Hall, Nana White Pepper and Emily Rhodes will take to the stage at Lytham’s Lowther Pavilion for a not-to-be-missed show on Monday July 8.

Tickets, priced just £10, go on sale at 9am on Friday May 17 from lythamfestival.com and lowtherpavilion.co.uk

Cinematic rock band BLANKET headline the night. The Blackpool-based four-piece – who released their debut album How To Let It Go through Sony’s Music For Nations label – have wowed critics and fans across the UK and Europe with their epic live sound.

Their enormous and ambient cinematic soundscapes have brought comparisons with Doves, Ride and Mogwai and a reputation as one of the UK underground’s fastest-rising bands.

Like Blanket, alt-rockers JEKYLL originally hailed from Blackpool and were signed by the prestigious indie label Fierce Panda (Coldplay, Ash, The Bluetones and The Polyphonic Spree) on the strength of their sensational live shows.

With festival appearances at The Great Escape, Liverpool Sound City, Tramlines and Threshold already under their belts, Jekyll’s growing fanbase includes BBC Radio One’s Huw Stephens who described them as “just brilliant” after their recent live session on his BBC Introducing show.

PIP HALL was labelled “the hottest unsigned artist in the country” in the national press and her wonderful debut album Everything Before – which features the brilliant My Eden, Mary and James – only serves to validate such a glowing appraisal.

Since 2016 they’ve graduated from playing small local shows to historic venues such as Nambucca, The Deaf Institute, 93 Feet East and Manchester Academy, as well as providing support to bands as The Wholls, Strange Bones, The Movielife and Bang Romeo.

Teenage songwriter EMILY RHODES is no stranger to Lytham Festival and this will be her third performance at the event. A finalist at the prestigious ‘Busk in London’ competition, Kirkham-based Emily’s debut release Get Out of My Way was produced by Blanket frontman Bobby Pook.

Lytham Festival co-founder Peter Taylor said: “We are really proud that throughout the festival’s history we’ve given a platform to up-and-coming local talent.

“This year is a really special one for the festival – our 10th anniversary – and so we are delighted to be partnering with BBC Music Introducing Lancashire to add this not-to-be-missed event to what will be a sensational week.

“BBC Introducing has helped the careers of some of the biggest British music stars today, so to be able to launch this year’s festival with an event dedicated to up-and-coming local talent is something we’re really excited to be doing.”

Since its launch in 2007, BBC Music Introducing has been dedicated to discovering and supporting new music with all BBC regions celebrating local music talent.

Tickets, priced just £10, go on sale at 9am on Friday May 17 from www.lythamfestival.com and www.lowtherpavilion.co.uk