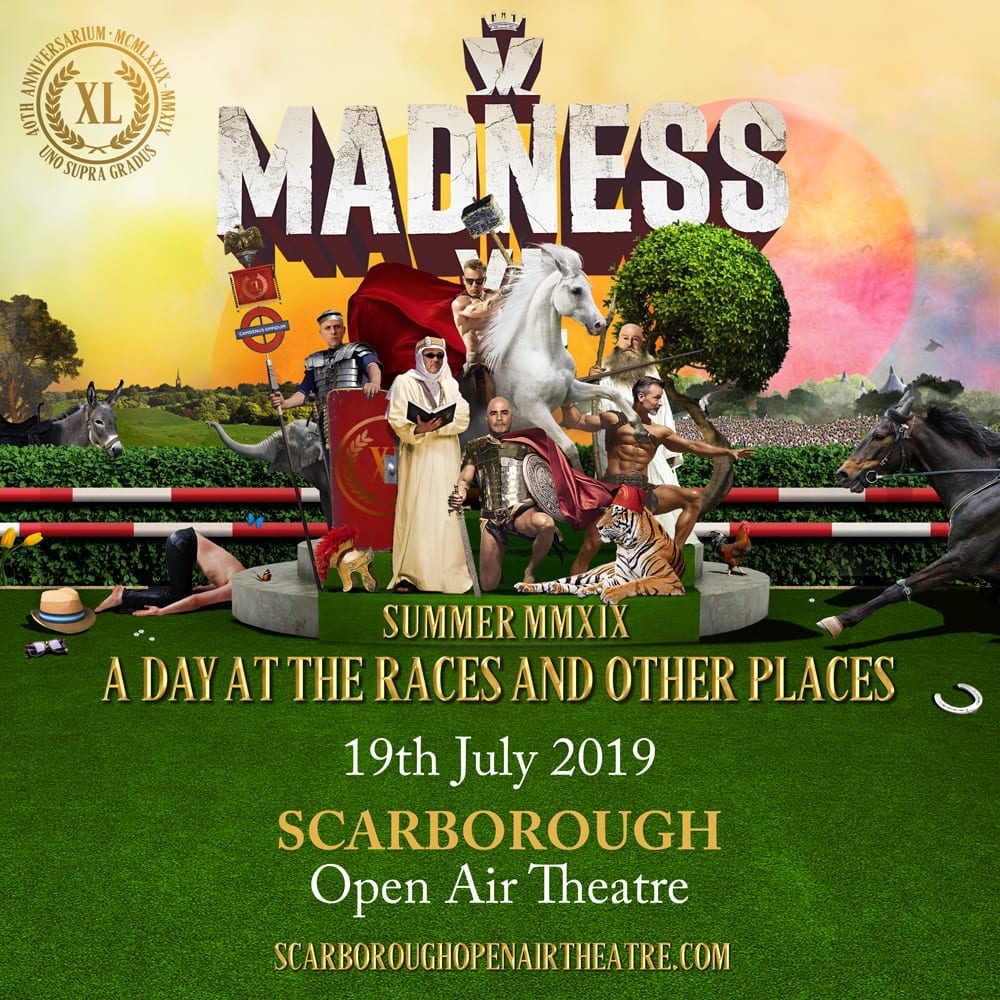 Fresher of face and fleeter of foot than ever, it’s hard to believe 2019 will mark four decades since a rag tag of self-proclaimed ‘hoolies and urchins’ first emerged, gloriously unreconstructed, from the back streets of Camden Town fusing reggae, punk and pop on their classic debut album ‘One Step Beyond’.

Now in the 40th year of their near-Imperial reign over popular music, 2019 sees a raft of activity including a not-to-be-missed show at Scarborough Open Air Theatre on Friday July 19.

Tickets go on sale at 9am on Friday February 22nd via www.scarboroughopenairtheatre.com

Talking about the band’s landmark year, vocalist Suggs said: “We’ve seen off eight Prime Ministers, 12 England managers and a nasty bout of lumbago. But, it’s not the endless achievements, not the unforgettable memories, it’s the fact we’re even still alive! (and miraculously in the rudest of health, thanks for asking.) Raise your glasses, lower your swords ‘arise sir Madness!’ Get stuck in! Here’s to the next 40!”

The Scarborough OAT date will be a glorious Yorkshire coast return for Madness who last rocked Britain’s biggest open-air arena in 2017. The show is presented by Cuffe and Taylor whose director Peter Taylor said: “Madness are quite simply one of the most successful British bands of all time and an unmissable live act.

“Over the last 40 years they have written some of the nation’s best-loved pop anthems and every gig they play is a celebration. We are delighted to be able to bring this truly unique and deeply cherished band back to Scarborough as part of their 40th anniversary celebrations.”

Formed in Camden, they have chalked up 15 UK Top 10 singles – including the timeless Our House, It Must Be Love, One Step Beyond, My Girl, Wings Of A Dove and Baggy Trousers – together with seven Top 10 albums.

Madness are currently beavering away in the studio on new material for release later this year, together with a series of massive gigs around the country. They play North London’s Kenwood House on June 15th, joined by a full orchestra. Then, on August 26th, they headline their own ‘House Of Common’ festival on South London’s Clapham Common.

2019 also sees the autobiography “Before We Was We – the Making Of Madness By Madness” hit the shelves. It tells the story of how Madness became Madness, how six unlikely lads become one of the most successful British Pop bands of all time, tracing the band members individual stories up to the start of their meteoric rise in 1979.