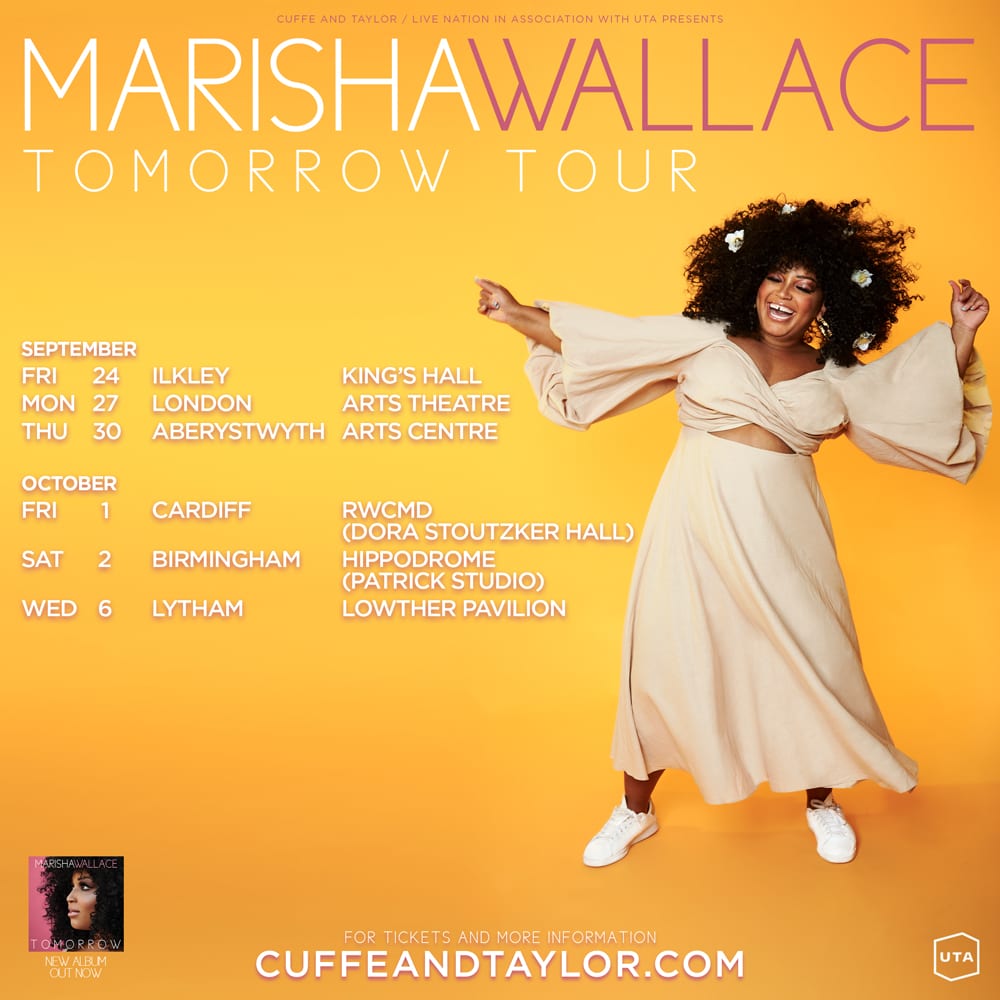 West End and Broadway sensation Marisha Wallace is delighted to announce an all-new UK tour for 2021.

The musical powerhouse – who has dazzled both the Royal Variety Performance and Strictly Come Dancing in recent days – is heading out on a six-date tour next autumn.

The announcement follows the release of Marisha’s stunning new album ‘Tomorrow’. Named BBC Radio 2 Album of the Week, ‘Tomorrow’ is a wonderful collection of uplifting show songs and sing-along pop classics delivered by one of the most instantly recognisable and beloved voices of a generation.

Marisha, the star of such smash-hit stage shows as Dreamgirls, Waitress, Aladdin and The Book of Mormon, will play these unmissable dates:

Tickets go on general sale at 9am on Friday December 11 via cuffeandtaylor.com

Marisha, who will also star alongside Michael Ball in the all-new West End production of Hairspray in 2021, said: “The thing I have absolutely missed the most in 2020 is performing in front of a live audience. My first ever UK tour was halted due to the pandemic earlier this year so it will be wonderful to get back into theatres in 2021 and do what I love the most.

“The response to my new album has been incredible. All the songs on the album have a really personal and special meaning for me, I loved recording them, and I cannot wait to sing these wonderful songs for audiences across the UK.”

UK audiences have taken Marisha to their hearts ever since the girl who grew up on a North Carolina farm arrived in the West End to take on the iconic role of Effie White in Dreamgirls.

Having suffered Covid-19 herself, she spent her recovery putting together a self-recorded version of the classic anthem of hope ‘Tomorrow’ to raise funds for those in the theatre industry affected by lockdown. Marisha independently released the track, which ended up on the BBC Radio 2 playlist and landed the Number 2 spot on the download charts.

Now, with the support of Decca Records and an album packed with songs full of hope Marisha is a force to be reckoned with.

Her Decca debut includes the barnstorming radio hit ‘Before I Go’ – a powerful anthem of pride, inner strength and empowerment – alongside such classics as ‘Purple Rain’, ‘Climb Every Mountain’, ‘The Show Must Go On’ on which she duets with Michael Ball and ‘Alive’ (written by Adele and Sia).

LISTEN TO ‘BEFORE I GO’ HERE