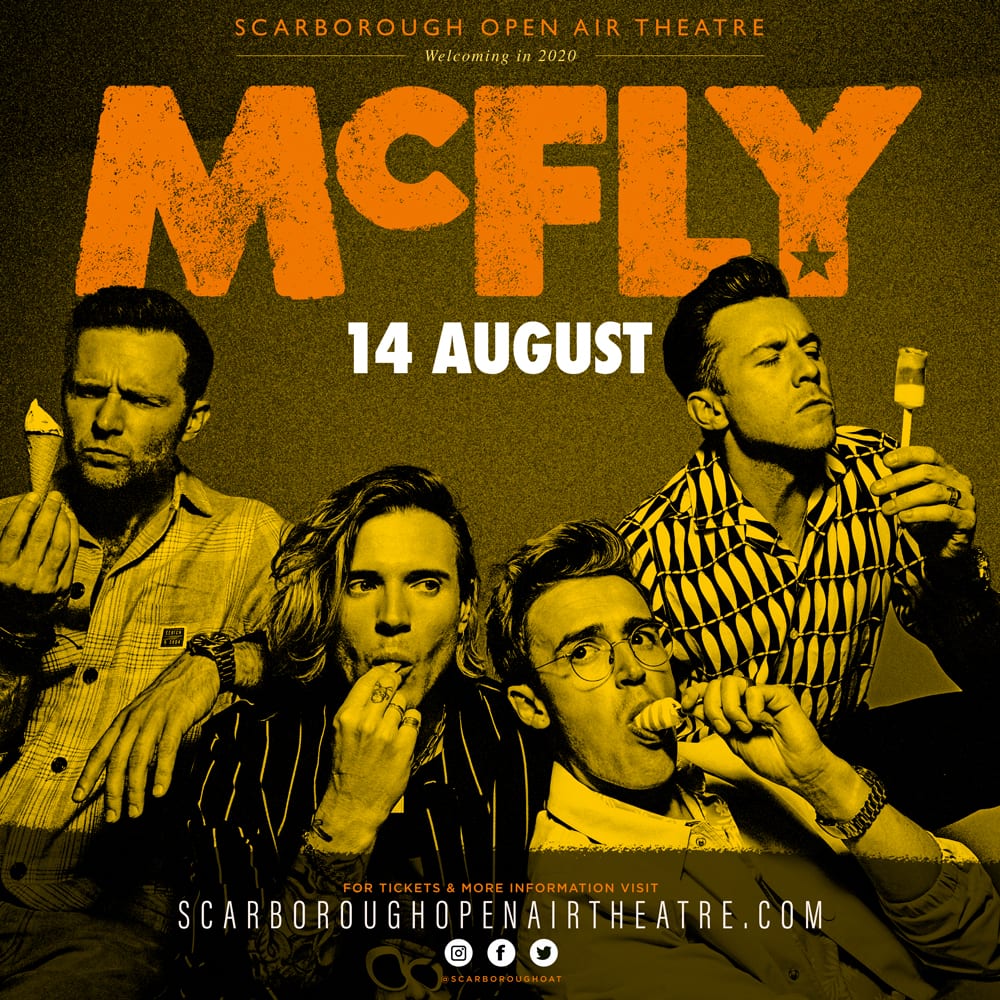 With seven UK number-one singles, five Top 10 albums, six sell-out tours and 10 million records sold worldwide, McFly are without question one of the most significant British pop acts of the 21st century.

And the band behind such massive hits as All About You, Obviously, Star Girl, One For The Radio and Shine A Light are today delighted to announce they will play a headline show at Scarborough OAT on Friday August 14, 2020.

Tickets go on sale at 9am on Friday, November 15 via scarboroughopenairtheatre.com

Since hitting the big time as the youngest band to ever have a debut album go straight to number one – beating The Beatles’ long-standing record – Tom Fletcher, Danny Jones, Dougie Poynter and Harry Judd have become one of the UK’s best-loved bands.

After spending some time apart working on their own projects – and joining forces with Busted to form the pop phenomenon that was McBusted – the McFly boys recently announced they would return to the live arena with a show at London’s O2.

This O2 show sold out in minutes leading to the announcement of a full UK arena tour in Spring 2020 – and now an unmissable date at the UK’s largest open-air arena, situated on the stunning Yorkshire coast.

“The boys played a sensational show here in 2013, and again as McBusted in 2014 and 2015. We are constantly being asked to bring them back and so we are delighted they’ll be back here next summer.

“McFly are a brilliant live band who always bring a spectacular show. As proved by the rush for tickets when they announced both their O2 show and their Arena Tour, we would advise fans to not hang around getting their tickets.”

McFly’s return to touring comes hot on the heels of the long-awaited release of ‘Lost Songs’. This sensational collection of original material from the band’s vaults was accumulated after the release of their last studio album ‘Above The Noise’.

The ‘Lost Songs’ is the material all McFly devotees have been clamouring for years to hear and the band is currently releasing it, for free, one track each week via all leading streaming services.

It is classic McFly, and now, at last, it is freely available to every one of their millions of fans around the world and will be performed alongside their mega-hits throughout 2020.

Tickets for McFly’s Scarborough OAT show go on general sale at 9am on Friday November 15 via www.scarboroughopenairtheatre.com or in person from Scarborough Open Air Theatre Box Office (01723 818111) and the Discover Yorkshire Coast Tourism Bureau (01723 383636).