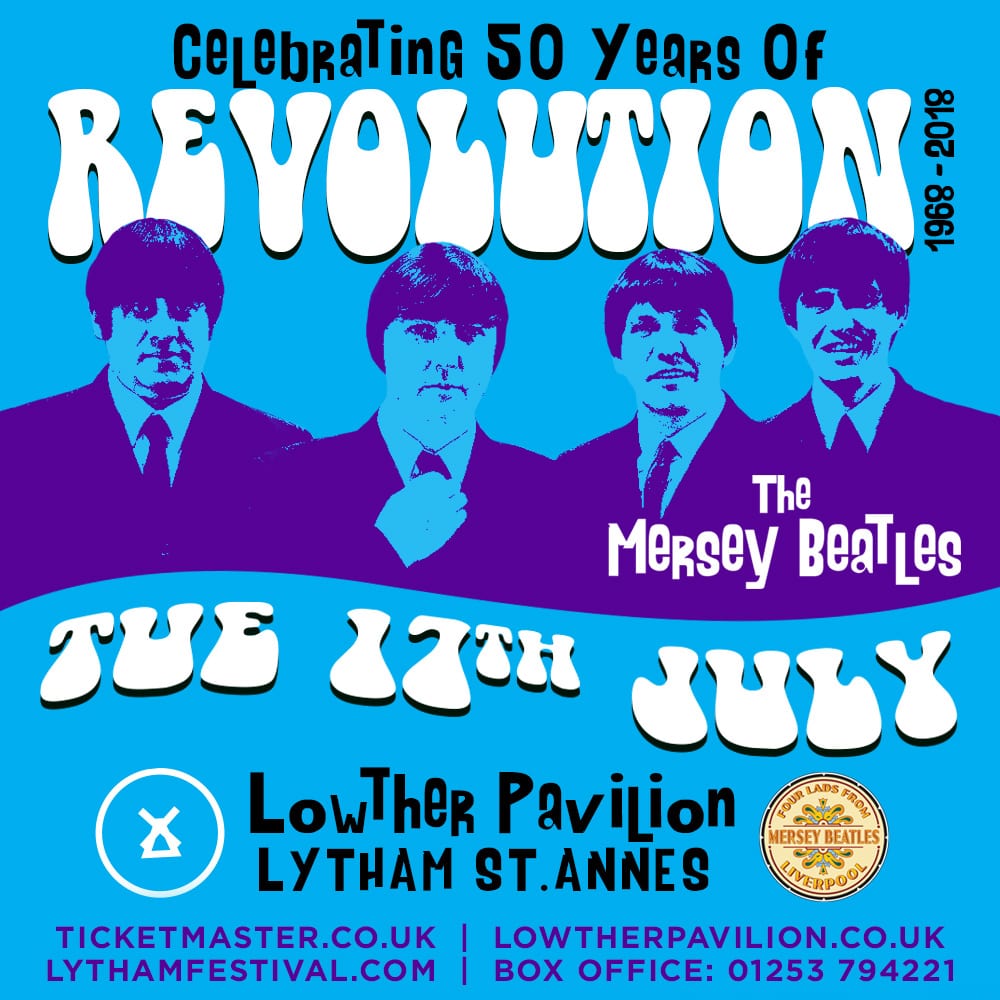 The Mersey Beatles are ready to take music fans back in time to “The Year Of Revolution” when they appear at Lytham Festival.

Fifty years after the release of the Fab Four’s ground-breaking 1968 album ‘The Beatles’ – known the world over as ‘The White Album’ – the world’s favourite Liverpool-born Beatles tribute will perform a special anniversary show at Lowther Pavilion on Tuesday July 17.

This two-part show will see the band perform seminal tracks and hits from the White Album including such legendary songs as Revolution, Helter Skelter, Back In The U.S.S.R and While My Guitar Gently Weeps.

They will follow this with a sensational second set of Beatles’ classics which will take the audience on a journey through the Fab Four’s legendary hit-packed back catalogue – from the songs of Beatlemania to Sgt Pepper and Abbey Road.

The Mersey Beatles were the resident Beatles tribute band at Liverpool’s world famous Cavern Club for 10 years. Since leaving The Cavern, The Mersey Beatles – who are Steven Howard, Mark Bloor, Brian Ambrose and Craig McGown – have wowed audiences around the world and played a sell-out show at Lytham Festival last year.

Steven, who plays Paul McCartney, said: “We loved our show at Lytham Festival last year and we can’t wait to return.

“The White Album is one of the most ground-breaking and unique albums of all-time. Fans love its quirkiness, its eclectic mix of songs, but these amazing tracks are very rarely played live so this really is a very special show.

“Our set ranges from beautifully poignant songs like Julia and Blackbird to rockers such as Helter Skelter and Revolution. It’s great not only for us as musicians to get the chance to play these legendary songs, but for Beatles fans who want something a little different.

“We then we follow it up with a second half which captures classic Beatles’ hits from the Twist and Shout days of Beatlemania, to the Fab Four’s ‘American Invasion’ and beyond.

“It’s a real Beatles’ party and it’s going to be another great night on the Fylde coast!”

Tickets for The Mersey Beatles at Lowther Pavilion are on sale from www.lowtherpavilion.co.uk or www.lythamfestival.com or by calling 01253 794221.