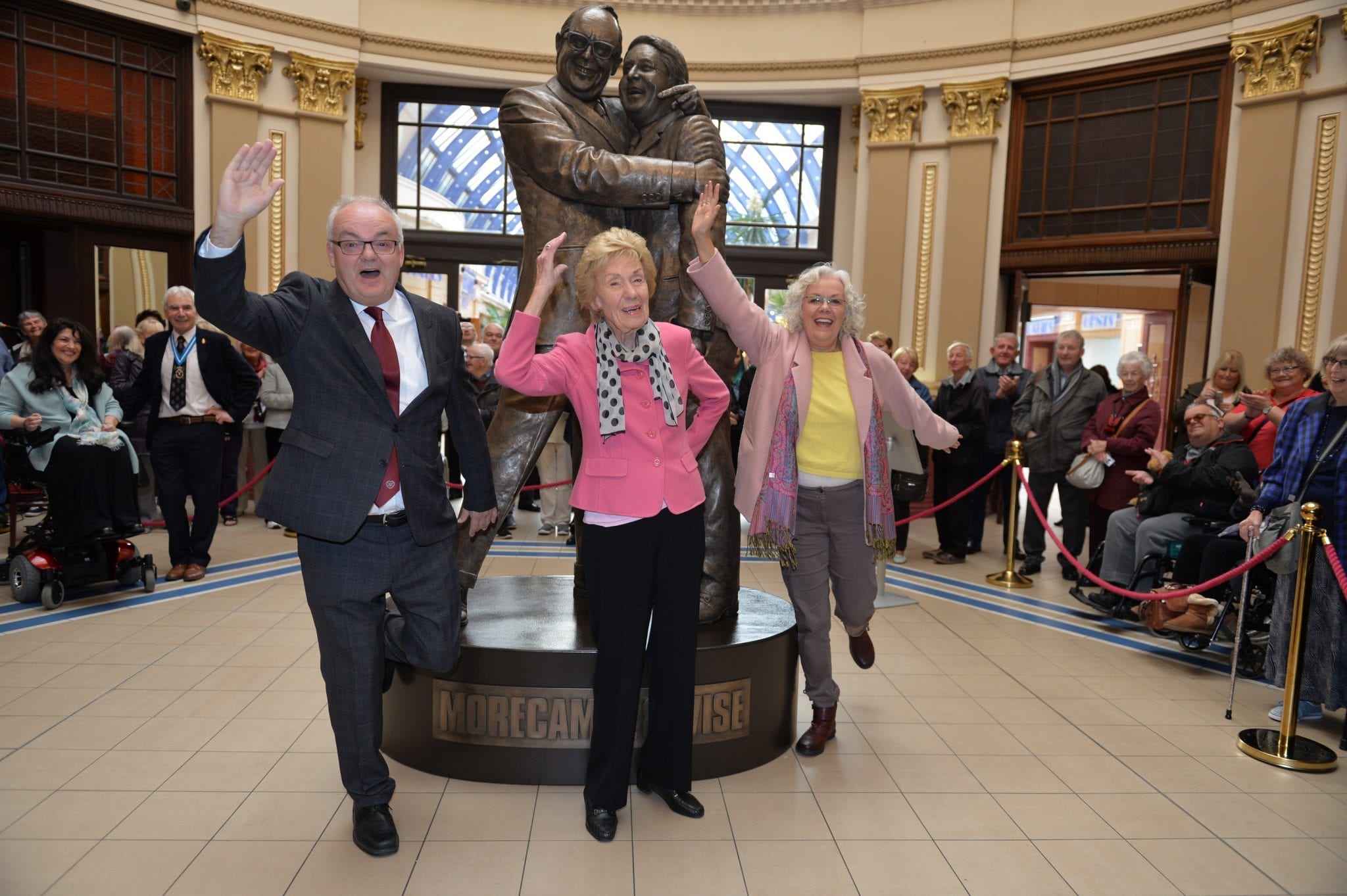 The nation’s first statue celebrating the comedy genius of Morecambe and Wise has been unveiled at Blackpool’s world famous Winter Gardens.

The stunning 8ft tall bronzed statue – created by renowned sculptor Graham Ibbeson – was unveiled by Eric Morecambe and Ernie Wise’s families at the Winter Gardens this morning in front of hundreds of adoring fans.

Eric and Ernie performed in Blackpool more than 1,000 times in their career and the statue was commissioned to celebrate the 75th anniversary of Britain’s best loved comedy double act first appearing on stage together in 1941.

Eric’s widow Joan, who was joined at today’s unveiling ceremony by eldest son Gary, daughter Gail and a representative for Ernie’s widow Doreen, said: “The statue is simply wonderful, Graham has really captured Eric and Ernie to perfection.

“For it to be unveiled here in Blackpool, where I personally have so many happy memories of Eric and Ernie and our families together down the years, is very fitting. This has been a really special day I will remember forever.”

Gary Morecambe added: “Blackpool was Eric and Ernie’s spiritual home, their careers really took off here, and to see them together again in this wonderful tribute is fantastic.

“Graham is a brilliant artist and the likeness to my father and Ernie is stunning. I am sure fans of Eric and Ernie, indeed everyone who sees it, will get a big thrill out of it.

“I think my father would have been gobsmacked by the whole idea of a statue. The fact it is here in Blackpool would have been a huge thing for both Eric and Ernie as it is a town they had so much success in and affection for.”

Sculptor Graham Ibbeson said: “It has been an absolute honour and a privilege for me to bring Morecambe and Wise – two of my all-time heroes – together again with this new statue which I am incredibly proud of.

“Eric and Ernie were able to bring the nation together through their genius and laughter and this statue celebrates them as they should be, a double act which Britain and the world took to their hearts.”

Michael Williams, Winter Gardens Managing Director, said: “This is a very special day for both the millions of fans of Morecambe and Wise and Blackpool.

“Eric and Ernie performed in Blackpool more than 1,000 times during their career and it is especially fitting that this stunning new statue has been unveiled here, which is regarded by their family and friends as the boys ‘spiritual home’.

“We are sure this wonderful tribute will become a must-see for comedy fans the world over.”

The statue, which has been funded through donations of £75,000, will be on permanent display in the spectacular domed entrance to the Winter Gardens.

Sculptor Graham Ibbeson has a long history with Eric and Ernie having also created the Eric Morecambe statue which was unveiled in 1999 by the Queen and now adorns the promenade in the comedian’s hometown of Morecambe.

During their years in Blackpool the pair entertained hundreds of thousands of people, playing at seven theatres, six summer seasons and enjoying a starring role in the 1955 Royal Variety Performance at the Winter Gardens.