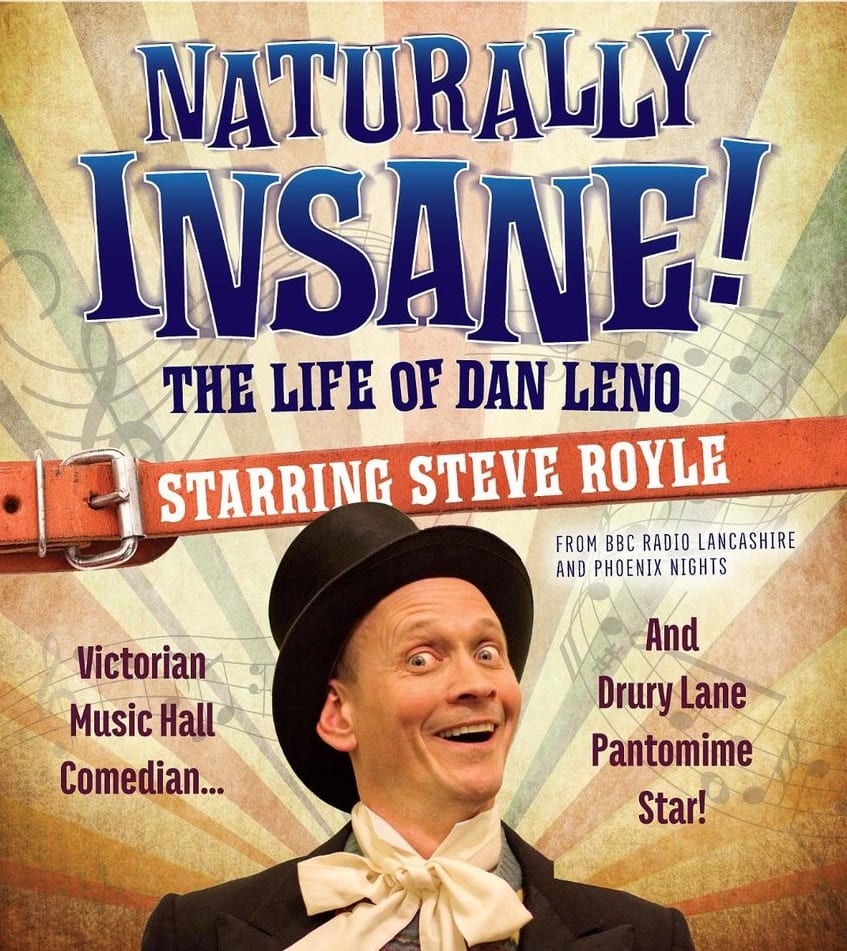 The amazing life and tragic demise of music hall legend Dan Leno is being celebrated in an unmissable production making its West End debut in April.

Naturally Insane! The Life of Dan Leno will premiere at the Criterion Theatre on Monday April 27th. Tickets are on sale now HERE

The London premiere of Naturally Insane! comes as the production has already toured across the UK and enjoyed rave reviews including the seal of approval from comedy legend Peter Kay.

Speaking about the production, Peter said: “It’s great to see the life of the great Dan Leno being brought to the stage with such brilliance. Steve Royle has funny bones and this unique heartfelt production allows us to see both Steve’s magnificent talent and Dan Leno’s.”

Naturally Insane! The Life of Dan Leno is set in Camberwell Asylum in the last weeks of Dan Leno’s life as he reflects on his life and career.

The Criterion Theatre has been chosen for this special premiere as it sits opposite the former London Pavilion Music Hall in Piccadilly Circus – where Dan Leno performed hundreds of times at the height of his fame.

A legend of his time, Dan Leno developed his skills as an artist in the Northern and Lancashire music halls before becoming a huge celebrity in London theatres. He also established his name as the pre-eminent pantomime star at the Theatre Royal, Drury Lane, where he created some iconic dame roles and became a favourite of King Edward VII and the Royal family.

Written by playwright David Slattery-Christy, Naturally Insane! presents a joyful insight into the life of a legendary comedian.

Roy Hudd agreed to perform in the Criterion Theatre production after seeing the play in Eastbourne.

He said: “So many folk have tried to bring the Victorian comedian to life – almost impossible I thought until I saw Naturally Insane! The Life of Dan Leno by David Slattery-Christy.

“This really is quite something. It captures the wild imaginings of a comic genius perfectly. Steve Royle looks like the man, moves beautifully, like the dancer Leno was, and makes you love him on sight. I do urge you to see it if you can.

“I’m excited about it. I do believe this play is a bit special.”

Steve Royle was offered the part of Dan Leno after David Slattery-Christy saw him performing in Blackpool Grand Theatre’s pantomime where Steve has performed as lead comic for almost 20 years.

Speaking about the role Steve, who has appeared in a string of comedy TV shows including Phoenix Nights, Max and Paddy and Stand Up Britain, said: “Dan Leno was as passionate about pantomime as I am and hopefully I do him justice on the stage.

“He is a hero of mine and it is therefore an absolute honour to get the opportunity to portray him in this masterpiece of a production.

“Everyone involved is thrilled to be bringing Naturally Insane! to the West End so it will be very exciting indeed when we walk out onto the stage at the Criterion.”

After the performance there will be a short interval before Roy Hudd, who is president of the British Music Hall Society, gives a talk about Dan Leno and his legacy.

For more information about Naturally Insane! The Life of Dan Leno and to buy tickets go to www.criterion-theatre.co.uk/whats-on