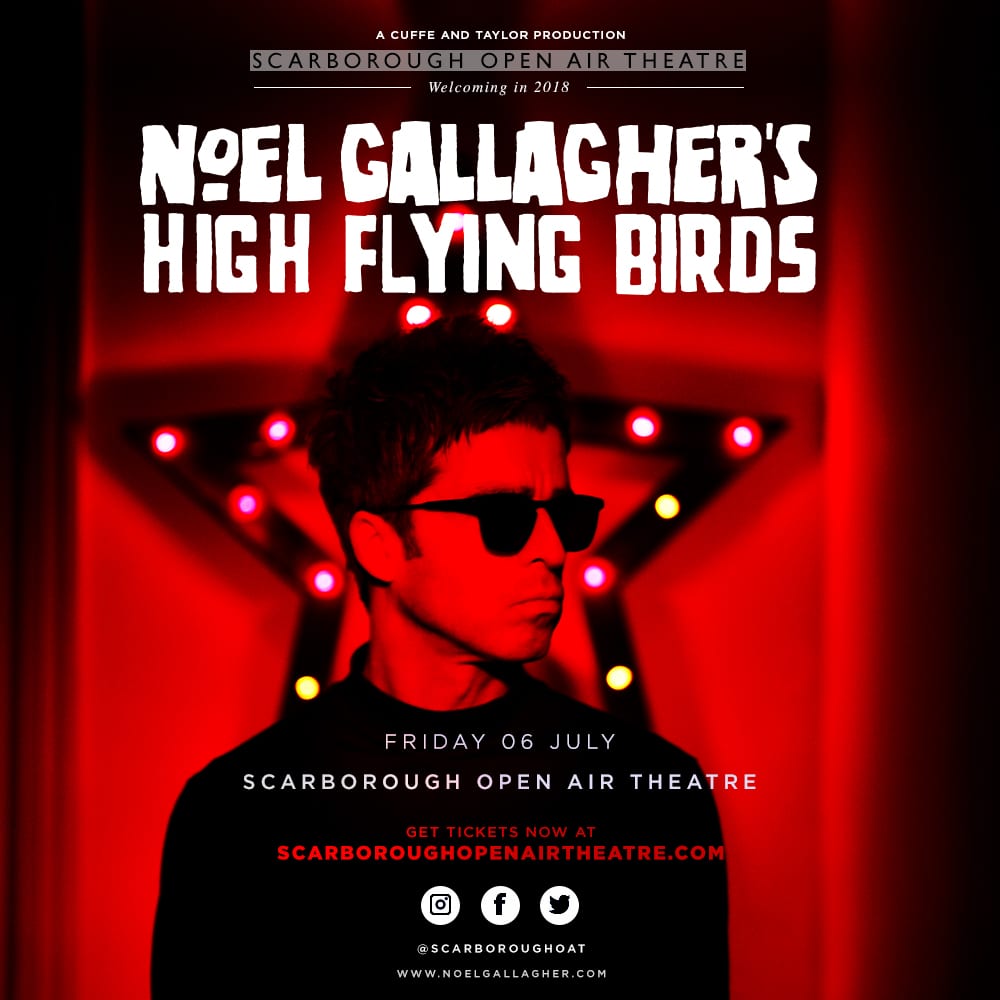 Fresh from the success of the No.1 album ‘Who Built the Moon?’ – and sold out tour dates around the world – Noel Gallagher’s High Flying Birds will play Europe’s largest open air theatre on Friday July 6.

Tickets on sale 9am Wednesday February 21 via www.scarboroughopenairtheatre.com

The gig sees a return to Scarborough OAT for Noel and his band who played a sell-out show at the venue in 2016 as part of the ‘Chasing Yesterday Tour’.

‘Who Built the Moon?’ – featuring the singles ‘It’s A Beautiful World’ and ‘Holy Mountain’ – is the third album from Noel Gallagher’s High Flying Birds and was released in November 2017 on Sour Mash Records.

Produced by acclaimed producer, DJ and composer David Holmes, it debuted at No.1, achieving gold certification less than two weeks after its release – making it a hat-trick of No.1 solo records following 2011’s eponymous album and 2015’s ‘Chasing Yesterday’.

This is also a record-breaking tenth consecutive chart-topping studio album for Noel – no other act has a perfect streak of No.1 studio albums as long as Noel.

From this month, Noel Gallagher’s High Flying Birds embark on a huge ‘Stranded On The Earth World Tour 2018/19’ performing shows in North America and Europe followed by UK and Ireland arena dates in the spring – including The SSE Arena Wembley, London, Manchester Arena and Cardiff’s Motorpoint Arena.

The Scarborough OAT date is presented by Cuffe and Taylor. Director Peter Taylor said: “We are thrilled Noel Gallagher’s High Flying Birds are heading back to Scarborough Open Air Theatre this summer. Noel’s show here in 2016 was amazing and this is quite simply going to be one of the highlights of 2018.

“‘Who Built The Moon?’ is a stunning piece of work and, when played alongside the many unmistakable anthems from Noel’s career, this is simply going to be a night no-one will want to miss.”

Tickets for Noel Gallagher’s High Flying Birds at Scarborough Open Air Theatre show on sale at 9am on Wednesday February 21 via www.scarboroughopenairtheatre.com or in person from Scarborough Open Air Theatre Box Office (01723 818111) and the Discover Yorkshire Coast Tourism Bureau (01723 383636).
To access exclusive pre-sale tickets – 24 hours before general sale – go to www.scarboroughopenairtheatre.com and sign up.