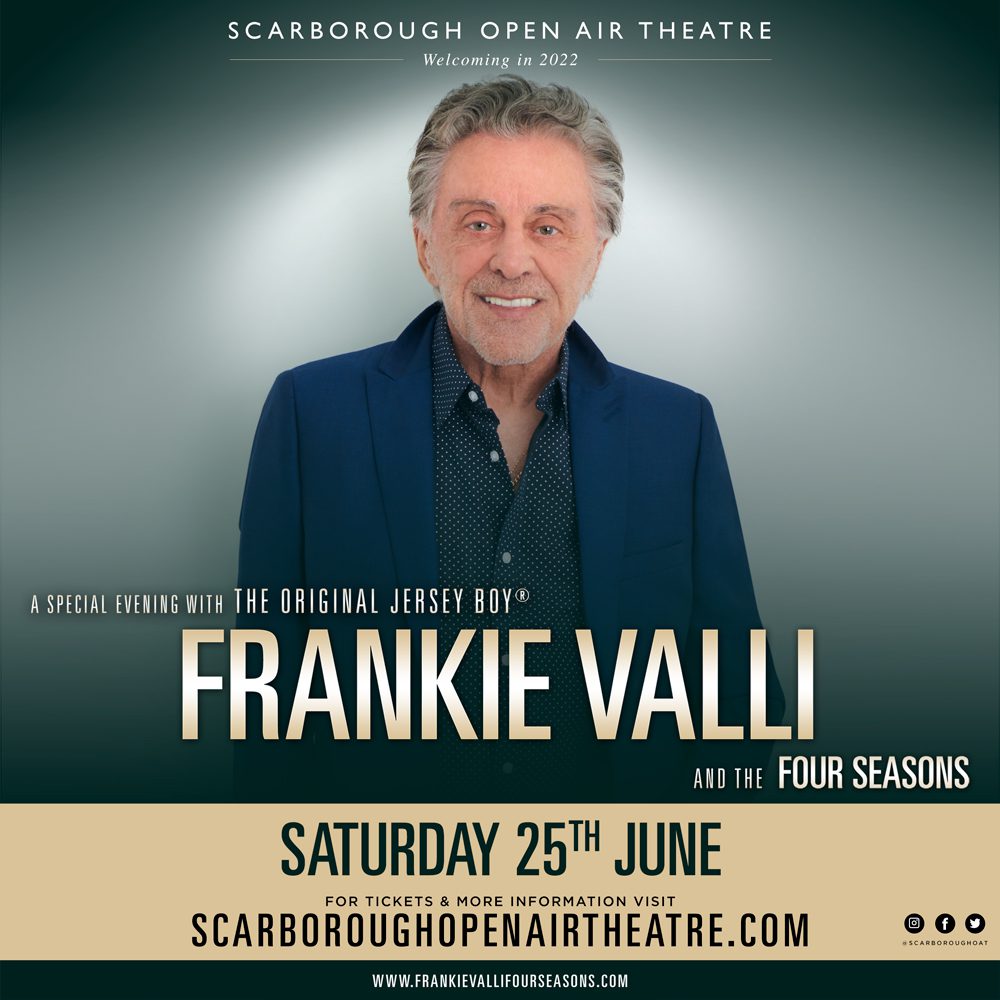 ‘Oh, What A Night’ in prospect as music icon Frankie Valli heads to the Yorkshire coast

The icons behind such timeless classics Walk Like A Man, Sherry, Can’t Take My Eyes Off You, Rag Doll, Oh, What A Night and Big Girls Don’t Cry headline the Yorkshire coast venue on Saturday June 25.

Tickets go on sale at 9am Friday September 24 from scarboroughopenairtheatre.com

Frankie Valli, who came to fame in 1962 as the lead singer of The Four Seasons, is hotter than ever in the 21st century. The volcanic success of the Tony Award-winning musical ‘Jersey Boys’, which chronicles the life and times of Frankie and his legendary group, has brought their music to a whole new generation of fans.

To date Frankie and The Four Seasons have sold more than 175 million records worldwide and were inducted into the Rock and Roll Hall of Fame in 1990. They play to huge audiences around the world and, together with their Scarborough OAT date, will play two nights at London’s Royal Albert Hall in 2022.

Scarborough OAT venue programmer Peter Taylor said: “The name ‘legend’ is often over-used but in Frankie Valli we have a true music icon.
“Frankie and The Four Seasons are behind some of the best-known songs of all time and we are absolutely honoured to be welcoming them here to Scarborough Open Air Theatre.

“Their stage shows are loved the world over and with Jersey Boys continuing to be a global smash hit, bringing the real thing here to the Yorkshire coast in 2022 is just fantastic.”

Frankie Valli has influenced many other great recording artists which was acknowledged in the dozens of tributes collected for Jersey Beat, the recently released Four Seasons boxed set.

Bee Gees legend Barry Gibb said: “Frankie Valli to me has become one of the hallmark voices of our generation. From the deepest emotions of his real voice to the power of his falsetto, he created a style that we all still strive to emulate.”

Billy Joel added: “I wrote ‘Uptown Girl’ as the flip side to the story of ‘Rag Doll.’ I always loved that record.”

And The Beach Boys’ Brian Wilson: “In the early ’60s the Four Seasons were my favourite group. I thought they were fantastic. The voice blend was fantastic. The competition helped me to get cracking. It inspired me, because they made good music.”

Tickets for Frankie Valli and The Four Seasons at Scarborough Open Air Theatre go on sale at 9am Friday September 24 from scarboroughopenairtheatre.com