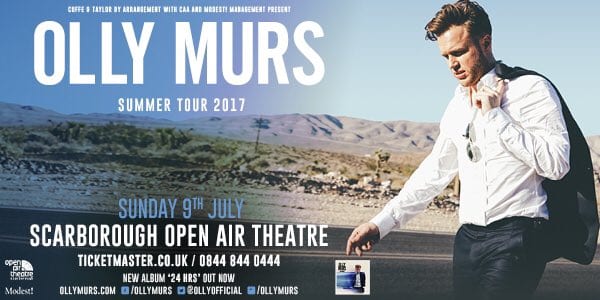 Olly Murs is heading to the beautiful Yorkshire coast as part of his massive 2017 summer UK tour.

Tickets for the concert go on sale at 9am on Friday December 2.

Olly joins music legends Cliff Richard and The Beach Boys among the headliners at Scarborough OAT in 2017 in what is shaping up to be a sensational summer line-up at Europe’s largest open air theatre.

2016 has been another incredible year for Olly which has seen him celebrate not only his fourth successive No.1 Album 24 HRS but also becoming the most successful solo artist ever to come from the X Factor.

New single Years and Years is the new album’s centre piece; an expansive, explosive, spine-tingling belter and follows the radio favourites You Don’t Know Love and Grow Up which Olly recently performed on the X Factor.

Olly’s Scarborough OAT concert is presented by promoters Cuffe and Taylor whose Director Peter Taylor said: “Olly Murs is one of the biggest stars in British music today and we are delighted to be bringing him to Scarborough OAT in 2017.

“He has sold more than 10 million records and played sold out shows across the UK so this is certainly going to be a night to remember.

“Tickets for this date will not last long so I would advise fans to get in there early to secure their place at one of the gigs of the summer.”

Since Olly shot to fame in 2009, he has recorded four multi-platinum albums, produced four Number 1 singles with total record sales exceeding 10 million. 24 HRS is the follow up to the acclaimed million selling Never Been Better.

Tickets for Olly Murs at Scarborough OAT go on sale at 9am Friday December 2 from www.ticketmaster.co.uk or www.scarboroughopenairtheatre.com  or in person from the Scarborough Open Air Theatre Box Office.