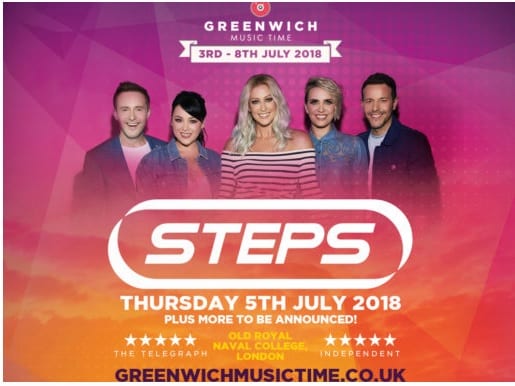 Pop superstars Steps are the first headline act to be announced for Greenwich Music Time 2018.

Tickets for the show go on general sale at 9am on Friday October 27th and are available from www.ticketmaster.co.uk

Steps – Lee, Claire, Lisa, Faye and ‘H’ – are well and truly back after returning this year with their stunning new album Tears On The Dancefloor and a string of sold out arena shows.

“Their new material is brilliant – fresh but true to their feelgood pop roots. It stands so well alongside their best-loved songs which made them not only one of the biggest chart bands but a record-breaking live act.

“The speed Steps sold out so many dates on their arena tour shows this is going to be a hugely popular night at Greenwich and one we can’t wait for.”

After announcing their return earlier this year to celebrate their 20th anniversary, the band released Tears On The Dancefloor – their first full album of original material since 2000.

Tickets for the band’s forthcoming ‘Party On The Dancefloor Tour’ sold out in a flash  with more arena dates added to meet the phenomenal demand.

It was clear proof that after 20 years Steps – who in 2001 set the then record for the most consecutive sold-out nights at Wembley Arena and have played to millions of fans over the years – remain a must-see live act.

Tickets for Steps at Greenwich Music Time go on sale at 9am Friday October 27th and  are available from www.ticketmaster.co.uk (0844 844 0444) and www.greenwichmusictime.co.uk