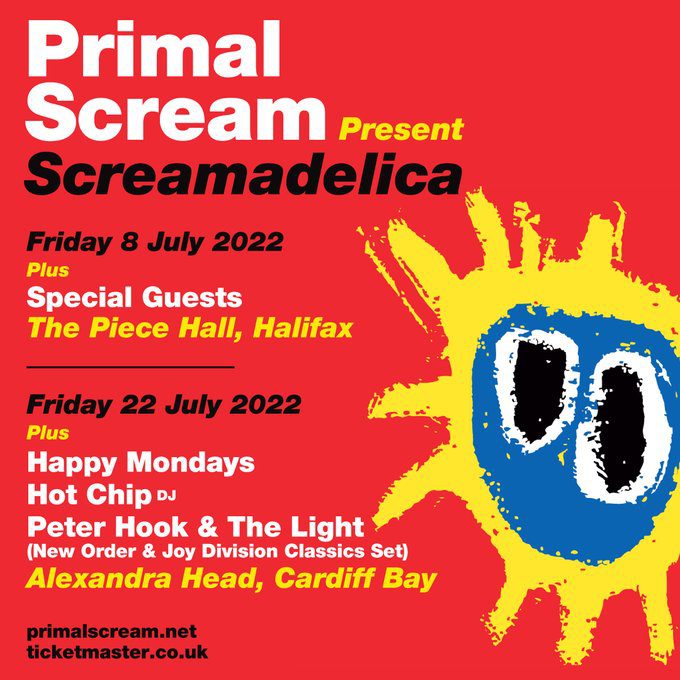 PRIMAL SCREAM TO BRING ‘SCREAMADELICA LIVE’ TO THE PIECE HALL

The Summer 2022 tour adds to the band’s celebrations to commemorate the 30th anniversary of their acclaimed landmark album Screamadelica.

And this unmissable live event is heading to The Piece Hall in Halifax on Friday July 8.

Tickets for the show – part of Live At The Piece Hall 2022 which is held in the historic venue’s stunning open-air courtyard – go on general sale from 9am on Friday December 3 via ticketmaster.co.uk

Screamadelica is widely regarded as one of the most influential albums of the last 30 years.

Released in 1991, and featuring such era-defining songs as Loaded, Come Together, Don’t Fight It Feel It and Movin’ On Up, the album is loved and revered by critics and music fans alike. It won the first ever Mercury Music Prize in 1992 and has, to date, sold more than three million copies worldwide.

And there is no better way to mark Screamadelica’s 30th anniversary than to see this classic album performed live and in full – together with many other classic songs from the Scottish band’s incredible career to date.

Both Noel Gallagher and Paloma Faith’s shows sold out within hours of going on sale, and Nicky Chance-Thompson DL, CEO of The Piece Hall Trust, is thrilled have another huge name added to the Live At The Piece Hall 2022 line-up.

Nicky said: “Primal Scream are a legendary British band whose iconic album Screamadelica is loved and cherished by music fans the world over.

“The album is packed with some of indie rock’s most recognisable anthems, and it’s going to be amazing to see these acclaimed and adored songs played live here at this historic and truly special venue. Another sensational night is in prospect here at The Piece Hall!”
To commemorate Screamadelica’s 30th anniversary a picture disc of the album and a 10-disc 12” Singles Box was released. The box set includes nine replicas of the singles from the original album campaign alongside Andrew Weatherall’s recently unveiled ‘Shine Like Stars’ remix – all pressed on 180-gram heavyweight vinyl.

The previously unreleased ‘Demodelica’ collection has also just been released. It provides a new insight into the album’s creation, with a variety of early demos and work-in-progress mixes. The digital, double-vinyl, CD and C90 cassette package come complete with new liner notes by Jon Savage.