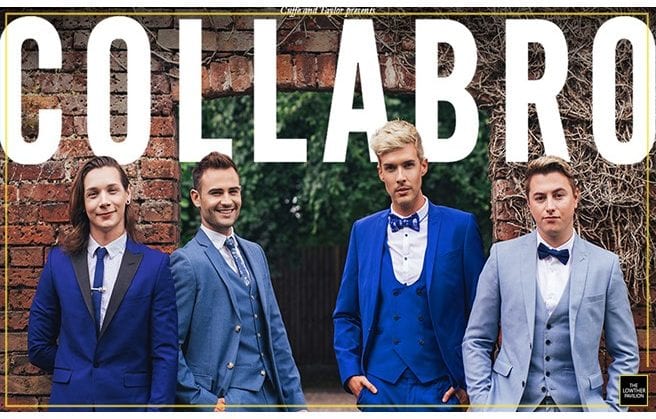 Two very special extra nights of live music are being added to the bill for Lytham Festival 2018.

And on Tuesday July 17, The Mersey Beatles – who played a sell-out show at the Pavilion Stage in 2017 – will return to the venue to perform a special show celebrating the 50th anniversary of the Fab Four’s ground-breaking ‘White Album’ as well as classic Beatles hits.

Tickets go on sale TBC at 9am from lythamfestival.com and lowtherpavilion.co.uk

Lytham Festival Director Peter Taylor said: “We had so many requests to bring both Collabro and The Mersey Beatles back to Lytham Festival following both of their sensational performances last year, so we just had to do it.

“Collabro show time and time again why they deserve the title of the world’s most successful musical theatre group. They continue to wow audiences wherever they perform, and we’re delighted their fans will be able to enjoy their return to Lytham Festival this year.

“To follow Collabro’s performance with the brilliant band that is The Mersey Beatles is further proof of the diversity that Lytham Festival offers audiences. They perfectly capture the spirit and sound of The Beatles and this new show – which has a special section dedicated to The White Album – will be a must see for Beatles fans.

“There will be a huge demand for tickets for both these shows so I would advise fans of musical theatre and The Beatles to act quickly to avoid being disappointed.”

The past year has been huge for Collabro. They enjoyed a sell-out autumn tour following a summer tour with Cliff Richard. Most recently, they have just returned from a two-week sell-out tour of Asia wowing audiences in Japan, the Philippines and Taiwan.

Since winning Britain’s Got Talent in 2014, Jamie Lambert, Michael Auger, Matt Pagan and Thomas Redgrave have performed across the globe to standing ovations, from the US, Asia and Canada and released their third studio album ‘HOME’ which reached the Top 10.

Collabro’s Lytham Festival show will be followed by the return of The Mersey Beatles.

Fifty years after the release of the Fab Four’s ground-breaking 1968 album ‘The Beatles’ – known the world over as ‘The White Album’ – the world’s favourite Liverpool-born Beatles tribute band are bringing a two-hour live show to the Pavilion Stage.

This stunning two-part show will see the band – who this year are touring America, Europe and the Far East – perform seminal tracks and hits from the White Album including such legendary tracks as Revolution, Helter Skelter, Back In The U.S.S.R, Yer Blues and While My Guitar Gently Weeps.

And they will also play a sensational set of Beatles classics which will take the audience on a journey through the Fab Four’s legendary hit-packed back catalogue – from the songs of Beatlemania to Sgt Pepper and Abbey Road.

Tickets for Lytham Festival are on sale now and are available from lythamfestival.com or by calling 0844 8154874.