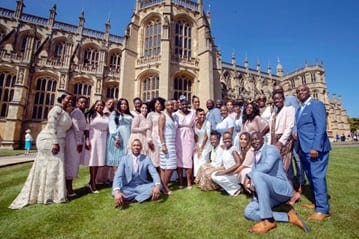 Royal wedding gospel singers The Kingdom Choir are heading out on a UK tour in 2019.

And now the choir is heading out on an 18-date tour across England, Scotland and Wales in April and May next year including a first anniversary celebration at the Royal Albert Hall in London, a year to the day after the wedding at St George’s Chapel, Windsor.

Following the Royal Wedding performance, The Kingdom Choir has made high profile appearances across UK TV networks as well as closing the Invictus Games in Sydney in October. Last month the choir released its debut album Stand By Me via Sony, which features the title track as performed at the Royal Wedding, as well as versions of Beyoncé’s Halo, John Legend’s All Of Me and Stormzy’s Blinded By Your Grace Part 2. It also includes original track Chases, written by members of The Kingdom Choir.

Karen Gibson, conductor of The Kingdom Choir, said: “The Kingdom Choir is absolutely delighted with the journey of the past few months! It’s been a rollercoaster, but we wouldn’t have it any other way – first, the honour of being able to sing at the Royal Wedding, then the thrill of being signed to Sony, and now a national tour!

“It’s like an un-dreamt dream – one that you wouldn’t even consider, because you never thought it could happen to you. We’re very grateful and very excited about what’s to come.”