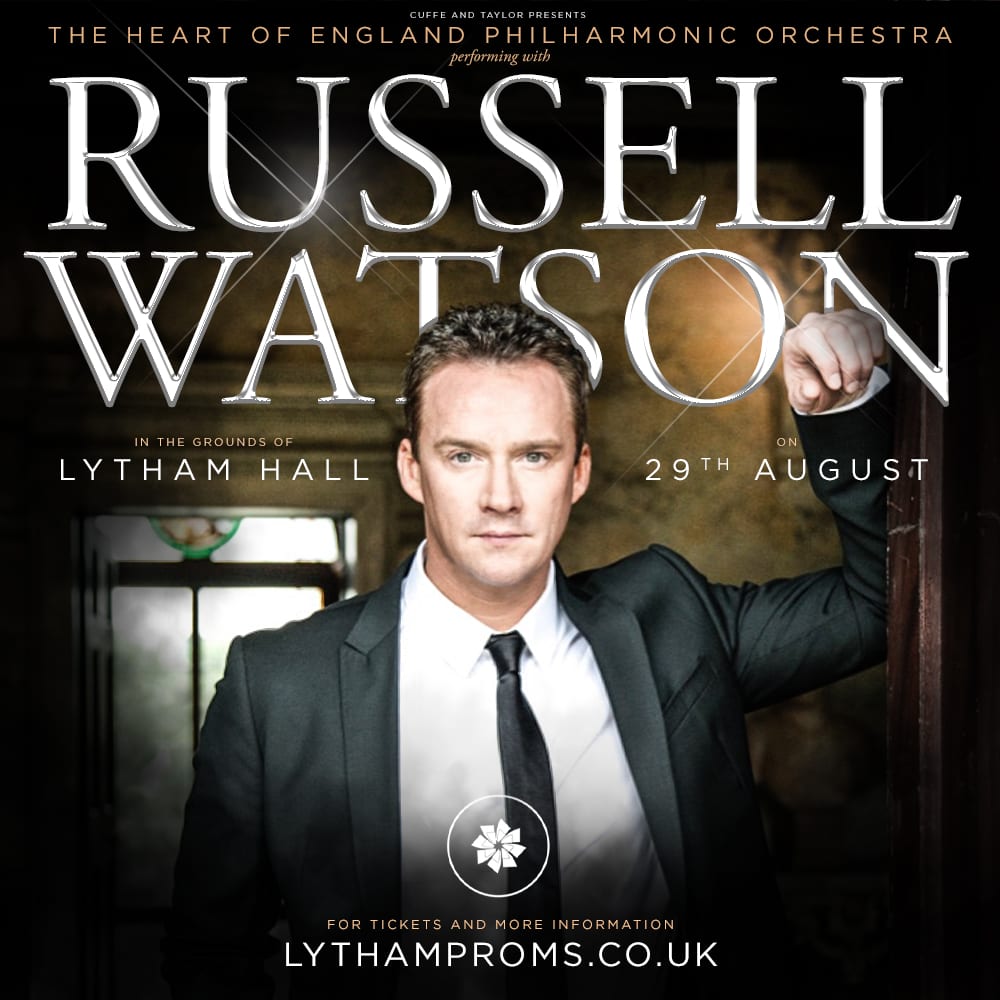 Russell Watson, one of the world’s most popular classical singers, will headline the brand-new Lytham Proms concert.

The celebrated tenor, hailed as The Voice following his debut album of the same name back in 2000, will be accompanied by The Heart of England Philharmonic Orchestra and guest artists when he performs at historic Lytham Hall on Saturday August 29.

Remaining tickets for the event are available now from www.lythamproms.co.uk

Lytham Festival organisers Cuffe and Taylor are behind the Proms spectacular which will see ALL money raised gifted to historic Lytham Hall for the continued restoration of the venue.

Lytham Proms marks a return to Lytham for Russell following his performance at the traditional Lytham Festival Proms Concert in 2013. 2020 also marks Russell’s 20th anniversary as a chart-topping classical recording artist and he said he is thrilled to be returning to the town.

“I’m absolutely delighted to be returning to Lytham for the brand-new Proms concert,” said Russell.

“This is a very special year for me. I am celebrating 20 years of doing what I love and now I can also look forward to sharing some very special moments when I perform at Lytham Hall.”

Since then Russell has released a further 10 studio albums, performed for some of the world’s leading figures and at countless prestigious sporting events while also touring the world.

Cuffe and Taylor director Peter Taylor added: “It is fantastic that we have Russell headlining the first Lytham Proms concert at Lytham Hall.

“He has the most wonderful talent and is also a great guy who will really entertain the crowd.

“Lytham Proms 2020 will be a very special event and our aim is quite simple – we want everyone to have an extremely enjoyable time while raising a lot of money for this historic Lytham landmark.”

The move to Lytham Hall marks the start of a new era for the ever-popular Proms concert and promises to bring all the pomp and circumstance of a traditional picnic proms event.

Cuffe and Taylor are underwriting the full costs of the event in year one so 100% of each ticket can be donated to the charity and go directly to Lytham Hall’s ring-fenced restoration fund – The Lytham Hall Appeal.

The Hall is managed by the Heritage Trust for the North West and all money raised from Lytham Proms will be used for further restoration and projects at the heritage venue.

General manager Peter Anthony said: “It is incredibly exciting that Russell will be headlining the first ever Lytham Proms at Lytham Hall and we can’t wait to welcome him here.

“This is going to be a wonderful event and we look forward to celebrating the pomp and circumstance of a traditional Proms picnic concert with a phenomenal performer while raising money for our beautiful Lytham Hall.”

Tickets are on sale now for Lytham Proms 2020 from www.lythamproms.co.uk and for more information about Lytham Festival go to www.lythamfestival.com